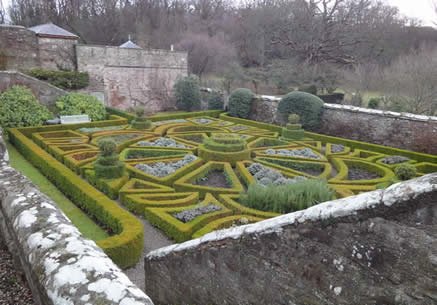 The box parterre at Bodysgallen Hall

We tend to start the New Year with a few days walking in North Wales. The day’s are too short, but with luck the sun shines on Snowdon and its attendant Moels, a quarter the height of the Alps but almost as beautiful in their snowy robes. You can choose your foreground; a castle, a garden, a Telford bridge, the pier and the creamy Victorian parade of Llandudno ……..

We stayed at the hotel with perhaps the most distinguished garden of any; Bodysgallen on the Llandudno peninsula. (Another which rivals it is its sister-hotel, Middlethorpe Hall in York. Wonderful that any hotel should keep such an ambitious garden – and in thoroughly good order). Over tea by the fire I discovered Steven Anderton’s recent book, Discovering Welsh Gardens, with photographs by Charles Hawes. Steven moved to Wales from Essex not long ago and set about exploring his new country, both its long-established gardens and its often surprising new ones. I always enjoy his
writing. He has a proper journalists’s questioning mind, not avoiding tricky questions. I looked to see what he says about Bodysgallen first, of course. The rambling stone tower house, Tudor in aspect though largely Victorian in reality, looks down over a series of enclosures, of which the uppermost is the most memorable, in effect a large stone tank filled with an apparently ancient box parterre.

The garden was developed in the late nineteenth century by Lady Augusta Mostyn, by all accounts a lady of great energy and benevolence. The centre-piece of the existing garden bears her name, as Lady Augusta’s Rose Garden: a vast parterre of fine proportions but a pretty poor showing of roses, as Steven Anderton points out. Perhaps, he says, the soil needs changing. In each garden he discusses, or most, he is ready to be critical and points out what needs doing – something singularly lacking in most garden writing. Christopher Lloyd enjoyed using words like ‘dismal’ or ‘banal’, but writers, and particularly magazine editors, usually feel constrained to be perhaps a shade too polite.

For editors it is a particular quandary. I remember when I was in change of The Garden stepping gingerly, I’m sure too gingerly, around features that called for criticism. After all, thinks the editor, the owners don’t have to let me in to write about the apple of their eye, and if we say what we really think about their lawns perhaps no one else will.