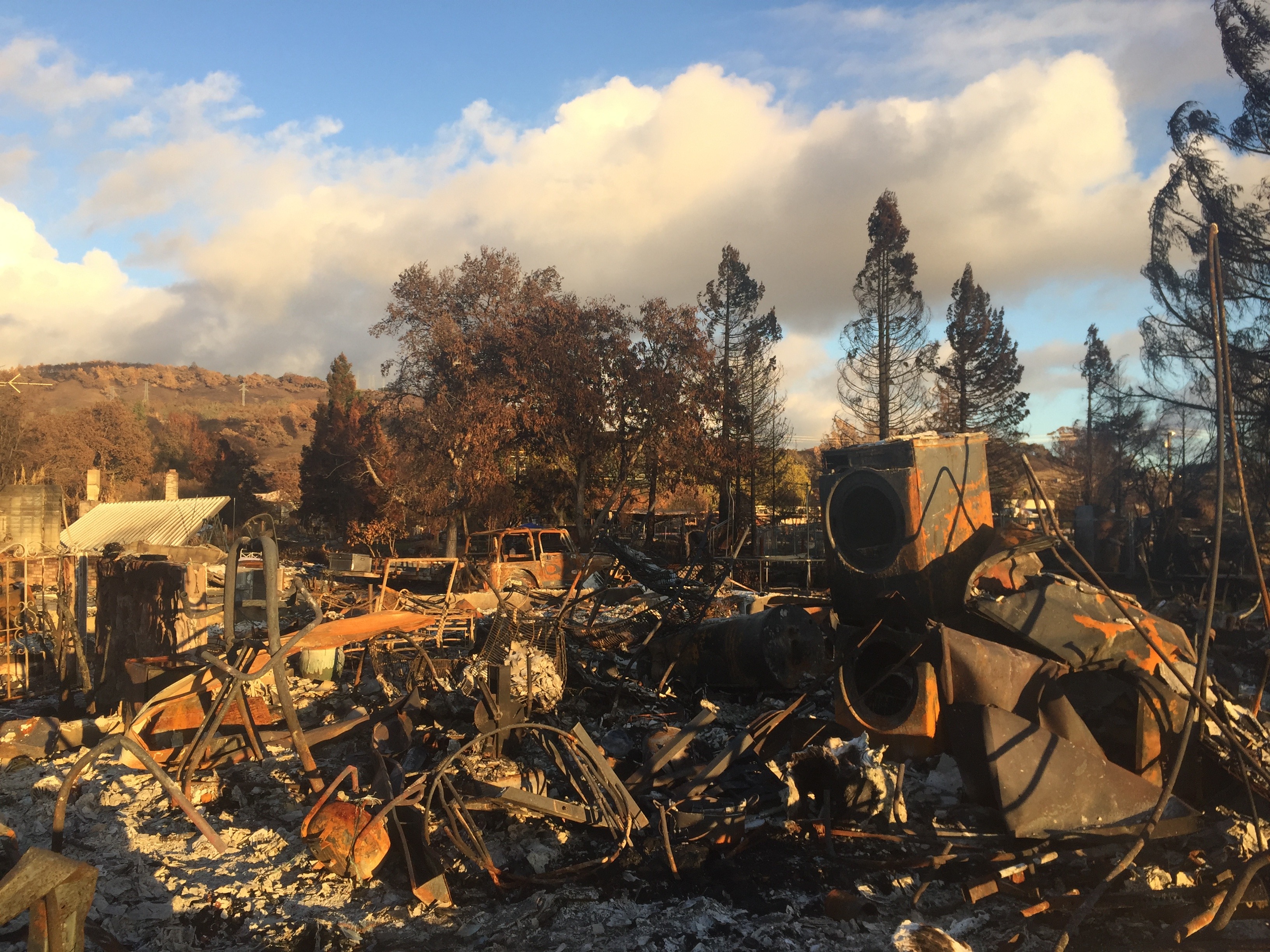 Back from a week in California, staying in one of America’s most beautiful gardens. Two weeks before the skyline around had been lurid with flames and the air tainted with smoke. In several towns everyone was evacuated. The Napa Valley, the Sonoma Valley and the surrounding hills were threatened by the worst forest fires in memory.

Molly Chappellet’s garden on Pritchard Hill is so integrated with the landscape of forest and vineyard that the three elements flow together – and her house so much part of the garden, so shrouded in plants and overhung by trees, that fire is a hazard no one ignores. But a fire like this month’s, driven by such a gale, has never been seen.

It broke out in the night, on October 8th, in so many different places that the local fire brigades didn’t know where to start. 10 days later fire-fighters from all over the West, even volunteers from Australia, were involved. Eventually it consumed almost a quarter of a million acres. It threw flaming embers so far and wide that the countryside is full of random blackened scars. In some it was a mere grassfire that left tall trees singed but unburnt; in others tree tops torched each other for mile upon mile.

California’s summers (and torrid summers all over the States) make the shade of trees indispensable: they are integrated into every farm, village, housing estate and city centre. We drove to Napa over the hills from Sacramento to the east, and to our consternation began to see cinders ten miles from the valley and its vines. The blackened patches were often spaced hundreds of yards apart. The wind had been so strong that sparks, or embers, flew that far, landing on tinder-dry grass. Spring rain had raised unusually tall grass; summer had baked it golden.

Coming down with the Napa Valley from Atlas Peak we saw the scale of the disaster. Miles of mountain forest were in ashes, the buildings scattered among the trees either unaffected or completely destroyed. So hot were the fires that all that was left was a chimney, a charred washing machine and often a burned-out car. Melted engine blocks were pale puddles on the road. Anyone without a car was at the mercy of the flames – yet miraculously only 42 people died, while nearly 9,000 buildings burned.

In Napa City, and Santa Rosa in Sonoma County, the sights were apocalyptic: whole neighbourhoods incinerated; just cinders under a clear blue sky.

In this valley of vineyards the fires were largely frustrated. They leapt among the trees but paused at the edge of the vines. Green vines are not dry enough to burst into flames. There was scorching at the edges, and the smoke will have tainted the ten per cent of the crop still unpicked. The vineyards in the main were effective firebreaks, but all the rest of the country is forest: oaks, red woods, pines, buckeyes, madrone and mesquite. Fire is part of its life-cycle.The forest has burned periodically throughout history. It’s the houses in it that are the problem.