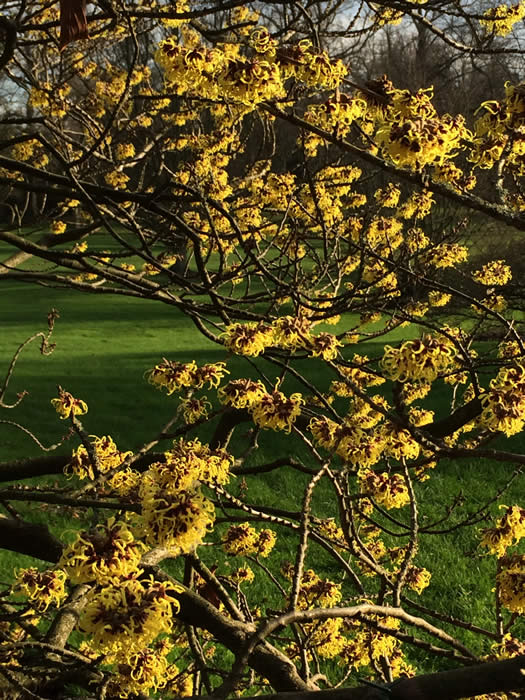 To Kew on pretty much the shortest day, but in warm sunshine and, mysteriously, most unaccustomed hush. Was Heathrow having a day off? Such planes as I saw were half a mile over to the west, beyond Syon Park, and almost out of hearing. On normal days you can stand on tiptoe and touch their undercarriages.

I was expecting – I suppose all visitors were – some dramatic manifestation of the absurdly warm autumn, now winter, weather. Would there be early daffodils, crocuses, camellias? Surprisingly, no. My perambulation usually follows the same circuit: turn right inside the Victoria Gate, inspect the parade-ground-precise bedding round the Palm House, then through the woodland garden (hellebores galore; little else in play) into the monumental rockery – the rocks looking their best, of course, but virtually only Galanthus atkinsii to show for snowdrops, and a clump of Anemone hortensis looking rather self-conscious. It’s extraordinary how at this time of year the eye hones in on anything with red in its pigmentation. Pink catches it, or purple, but yellow and white just don’t have the signal strength.

It’s the little Davies alpine house, the one with a hump back, that holds mid-winter performers, and even here nothing seems premature. The stars are paper-white narcissi, cyclamen, one or two irises, Primula verticillata from the Near East, and the tiny Lithodora zahnii from Greece, its pale blue flowers hopping with bees. No sign of the dazzling blue Chilean cyanocrocus yet, but my favourite Scilla madeirensis is almost over – at last a sign of the times?

The grass collection is predictably alert, in its shades of buff, but heading for Kew Palace and the river, all seems normally mid-wintery. Perhaps the alder-catkins are longer than normal; hornbeam buds look riskily green, but when I come to the Rhododendron Walk there is little sign of action. I expect camellias to be up and doing: very few (and here in Kensington, Camellia Central, it’s the same). Two rhododendrons uphold the honour of their race: R. pulcherrimum and R. ‘Rosa Mundi’, their pink/white and plain pink flowers in good supply. They prove the point that red pigment has a disproportionate pull on the eye in a picture of green, brown and grey. One can only speculate on why their ‘Caucasian’ (i.e. Anatolian) blood makes them so hasty.

Witch hazels, of course, in the garden by the little temple that surveys the huge restoration project of the Temperate House, are in full flower. I’ve wondered for years what their smell reminds me of. At last I have it: cooking tripe. They catch your eye at a distance as a pale yellow cloud. Otherwise the main eye-catchers are the decorations in the winter funfair that pulls the children (hopefully future botanists) into Kew.

A letter in The Times lists what is in flower in Cornwall: the whole garden, it appears. In London the picture is quite different: confusion reigns. Jasminum polyanthum is flowering high on our east wall but not in the greenhouse, where its buds are not even showing their preliminary purple. Our Camellia ‘Top Hat’, often in flower by Christmas, has only opened two of its pink blooms. In Kensington Gardens I haven’t yet seen a narcissus in flower; just the mechanical patterns of municipal polyanthus and a peep of Iris here and there.