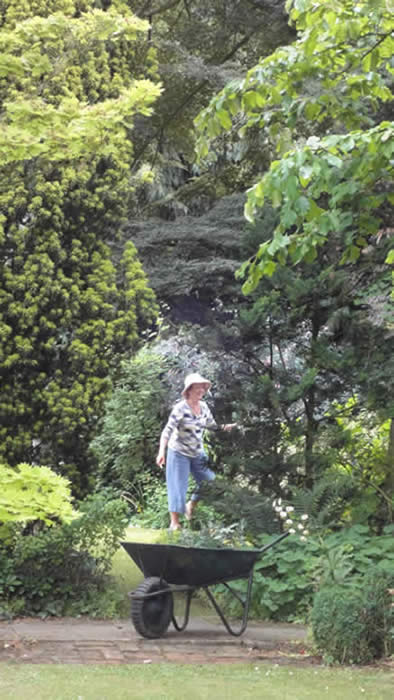 They did. If you read this diary in backward sequence I am answering the question in the last instalment.

If no good deed ever goes unpunished perhaps no bad deed goes unrewarded. What else can account for two daughters’ weddings in the garden, seven years apart, being blessed with days of a perfection I didn’t dare imagine ?

What has conspired this year to deliver a garden greener, more full of flowers in first flush, at the point when sprays are still fresh, spires upright, leaves unblemished, than it has ever been before ? Did the seasons hit a magic sequence ; a royal flush of perfect measurement of temperature, sunshine and rain? Certainly after cleansing winter cold there was a good topping up in February
and March.Then no rain for two months meant (among other things) no slugs. And here (though not elsewhere) little damaging frost.

Elbow grease has not been wanting. We watered and dead-headed down to the wire, but the buds had to be there in the first place, and nothing but providence can explain the timing. The Monday before wedding day our showpiece climbing rose, Wickwar, 50 feet (no, just remeasured : 60 feet) into the trees, opened its first bud. On Saturday there were 10,000.

It’s true I cheated a little. I packed the beds with midsummer flowers. Thalictrums of various persuasions are important, along with the delphiniums and emerging campanulas (C.persicifolia the star, both blue and white, both herded into clumps and scattered where it seeded). The first daylilies are finishing; so, sadly are the Siberian irises, the most delicate of that tribe. It is the (slightly late) cusp of summer, with the main performers just finding their voices.

And what a list. The golden oats of Stipa gigantea are already waving in the sun with the cool blue leaves of Macleaya in contrast. White foxgloves and blue delphiniums. Clematis durandii, tied into hazel wigwams, in deep indigo (though not so deep as the neighbouring Baptisia). Salvia nemorosa repeats the dusky theme in purple against the greys of Artemisia ludoviciana, lychnis chalcedonica with bright magenta flowers and Phlomis italica with the gentlest pink. Nepeta sibirica and Tradescantia ‘Zwanenburg Blue’ are rather irrelevantly punctuated by the silver of Miss Willmott’s Ghost. Yucca flaccida is still just phallic spikes before its ivory bells appear. Lilium regale is raising its trumpets to blow. Allium are fading and penstemons preening, lavender a forest of pale green tentacles, alstromeria flecked with tentative colours.

Pale roses shine so bright at dusk that the others almost disappear. Iceberg above all, but also Buff Beauty and Penelope, with Paul’s Lemon Pillar, fading on the wall, filling up with a violet Clematis viticella. Euphorbia palustris is more important than ever as a bulwark of brilliant green. Geraniums, pale pink and Johnson’s Blue (an easy name to remember) surge over the grass. As for paeonies, a full frilly white and the absurdly formal Bowl of Beauty, I have never seen so many, let alone so many standing up straight.

The paths are frothing, here and there, with valerian, here white, there pink, and the unstoppable little paving (or Spanish) daisy (or fleabane), Erigeron karvinskianus. At dusk the honeysuckles breathe out (is Early Dutch the six o’clock one and Late Dutch the follow-on at seven ?)

Can a garden feel, and echo, the happiness of a wedding ? So it seems.