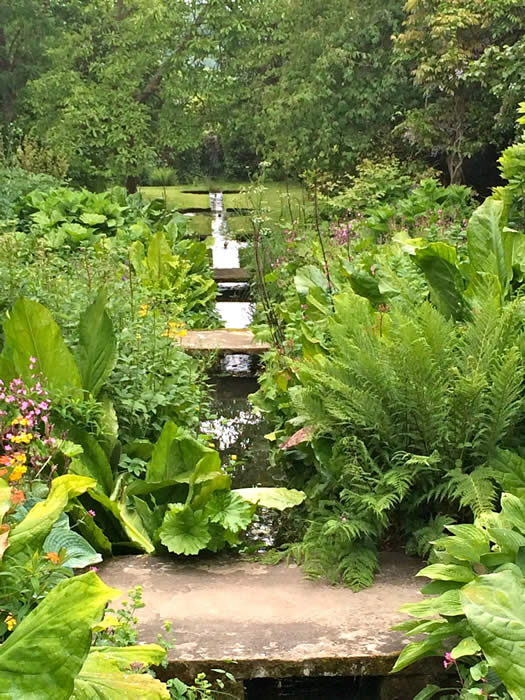 Here’s a simple rule for creating a memorable garden: choose a south-sloping hill with a gushing spring at the top. Then tease the water down, across, fast and slow: play with it; let it lie in pools and splash down steps, shallow steps and steep ones, singing different tunes.

This is the formula at Shute House in Dorset, refined to concert-pitch by Sir Geoffrey Jellicoe over many years for Ann and Michael Tree. It put me in mind of Ninfa, that supremely hydraulic garden south of Rome, where a crystal river races through the ruins of a medieval city. Shute is the English Pastoral version, smaller, quieter, shady rather than sun-baked, but equally haunted by Naiads, the nymphs of springs and streams and pools.

Did I hear that Romans discovered the spring at Shute Hill? If they were ever here they could hardly have missed it, and knowing their taste for water they would surely have made the most of it. It rises, these days, in a circular pond perhaps twenty feet across, half-lost (and half-found) in thick curtains of laurel and rhododendrons.

So much water wells up from the crystal depths that it leaps down the overflow to ripple the surfaces of a pièce d’eau perhaps a hundred yards long, a dog-leg shape so designed as to seem two different ponds. One is sinuous, a little Stourhead banked with lawns and rhododendrons and navigated by black swans, the other a calm canal contained in high beech hedges, leading to a deft sketch of a Roman theatre.

The divided waters continue on their separate ways. From Stourhead they tumble into another informal pond and continue as a shady stream crisscrossed with meandering woodland paths. From the canal they emerge under tight control in a garden of stepped terraces, splashing and gurgling between parterres full of every plant that loves moisture and warmth.

That game over another begins: a racing runnel down a grassy glade; leaping with such brio into three hexagonal ponds that the pressure feeds little fountains to ruffle their mirrors. Each leap is a little organ of pipes tuned in a different key; the air is full of watery notes, from murmur to tinkle, through bubble and splash.

That long-disused word ‘felicities’ needs reviving to describe the various incidents en route. There are arches leading to more enclosures, more parterres of bold planting, little bridges and towering trees. The classical stone house lies to one side, its terrace surveying a long view to distant downs and the next destination of the playful water: more ponds in the fields to reflect a cloud-banked sky. 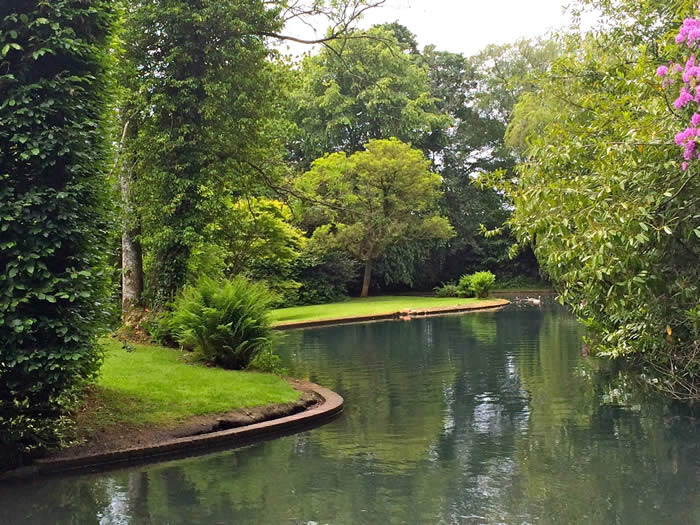