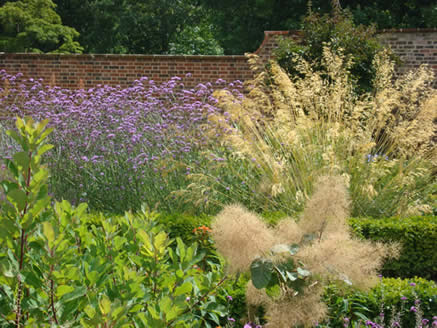 The dormitory suburbs of London have obliterated countless historic gardens. I still remember with a shudder witnessing the last moments of Stubbers, the house on the London fringe of Essex where the botanist / brewer William Coys, in Queen Elizabeth’s reign, grew the first yuccas, Jerusalem artichokes and ivy-leaved toadflax in England – and much else besides, I expect. Humphry Repton did a Red Book for subsequent owners, the Russells. Napier Russell took me to watch workmen from Havering Council break up the black and white marble floor of the conservatory with sledge hammers, before they leased the park for gravel extraction.

All the more wonderful, therefore, to visit a similar house that survived. Valentines is as marooned as it could be in the centre of Ilford, half a mile from the North Circular Road and surrounded by the sort of villas that seem to reproduce themselves in this country, generation after generation, their genes recklessly blending Tudor with Moorish and cottage with Bauhaus.

Valentines has not only survived a hundred years as a council owned white elephant, used as offices, for refugees, as surgeries and a school, it has kept the garden and a great deal of the park laid out around it from the 17th to the 19th century.

Ten years ago Redbridge council engineered two Millennium Lottery Fund grants, one of £3 million for the garden and another of £2 million for the house. This spring it opened for business as a sort of council-owned stately home. It is exceedingly well done, both the house and the garden, which is a rare example of an early 18th century landscape, complete with a long canal, patte d’oie, two shell grottoes, walled garden, a lake and some remarkable trees.

The curator, Nigel Burch, has found an admirable compromise between the demands of a public park and the aesthetic of a country house. Old box hedges in the walled garden brims with the plants of our time in bold decisive blocks. If future landscapes emerge from the humdrum streets of Ilford Valentines will surely deserve the credit.