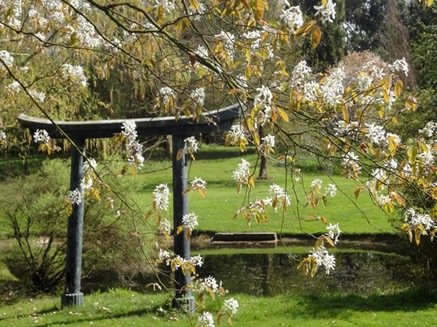 Surely it isn’t even legal, let alone customary, to have peach trees, pears and apples flowering at the same time. (Except, that is, at Chelsea.) What is ‘Star Wars’, that far from bashful magnolia, doing flowering alongside my peach tree? Indeed, why is my peach still at it, having started flowering in February? This is not season creep but season leap.

The cherries are all flowering together, bar the earliest. But so are the pears from my crusty old Bergamotte d’Automne, now a fifty-footer, to the designer -model Pyrus salicifolia, a ten-foot dome of aluminium leaves and beguiling cream flowers. The apple trees are showing a shy flower or two, the crabs (John Downie in particular) much more than that. Meanwhile the hedges are a foam-bath, dazzling white, of the blackthorn that proclaims bitter weather.

Whatever message the oaks and ashes bring has surely never been more emphatic. The oaks are showing the tender olive green of their emerging leaves while the ashes are still bare black tracery. I fervently hope they are in a muddle too. We have had no rain since the end of February: without a soak we are in trouble.

It is hard to say how much would have happened on the ground if it had rained: how far out should the roses be in the second week of April? Herbaceous plants are holding back. Early flowerers are flowering without growing; I am looking at a clump of perennial honesty that should be at least two feet high when it starts to flower. It is barely one foot. Weeds, on the other hand, are mercifully quiescent too.

Bulbs are in the same plight. Bluebell clumps are small and stunted, showing a few desultory flowers. As for daffodils, they have scarcely opened before they start to shrivel; the idea of an organized sequence has gone by the board. One of the last, and prettiest of all, my favourite ‘Thalia’, a duet of delicate white flowers on each stem, is already looking jaded.

Spring is always a hurry. I regularly complain I need more time to take it all in. But this year reminds me of New England: blink and you’ve missed it. Whatever am I doing sitting scribbling indoors?