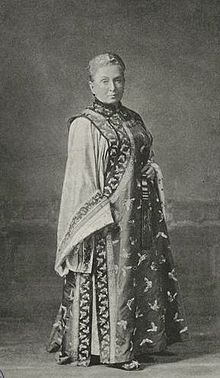 Who was Isabella Bird? Her name kept cropping up when I asked a Japanese friend questions about history; it seemed that Mrs B was a prime authority. Then I learned. She was a Victorian traveller – and what a traveller. She went, alone, to the limits of the visitable world – and beyond, particularly in Japan.

This was in 1878, when the country had only been open to foreigners for 25 years, and was very far from being modernised. In the north, which she explored with patient thoroughness, there were essentially no roads. She searched for rideable horses (even the best were broken-down nags) and hacked with her native manservant/interpreter from village to village, recording every detail. Lodgings were local inns, devoid of any privacy or comfort. She was mobbed as the first foreigner (let alone foreign woman) ever sighted. Fleas and mosquitoes were everywhere. Often there was only beans and rice, sometimes an egg, to eat. Tracks were often streambeds – it rained incessantly – and she was constantly coming off her stumbling mount. But her prose never falters, and at times becomes poetry. She spends a week examining the great Shogun shrines at Nikko, detailing every carving in its overwhelming decoration. She identifies plants with a keen botanical eye, she describes the Shinto rites: a whole expedition could not have done more.

When she reaches the land of the ‘Hairy’ Ainos, the indigenous tribe conquered by the Japanese, she shows total fascination with the ‘savages’, as she calls them. She finds them physically far more attractive than the ‘puny’ Japanese, and I suspect falls half in love with a young warrior. She spends weeks recording their language, moving from coast to mountains, to compare dialects. And it is clear they fall for her.

This Edinburgh housewife (her married name was Bishop) was not often at home. Her accounts were written on letters to her sister (there were 44 from Japan, thousands of words in each). How she handled pens, ink and paper on horseback through floods is a wonder in itself. But Japan was just one trip. She explored the USA, by steamboat to Cincinnati and St Louis, then the Great Lakes to Canada. She reports on each emerging city in detail, recounts appalling voyages on the stormy lakes and the paddle-steamer passage down the St Lawrence, shooting rapids where one in eight ships came to grief.

Where else did she go? To Malaya, China, Korea, Persia, Tibet and Australia – each one a volume. Since I found Mrs Bishop on my Kindle, she takes every bus ride with me. TfL has competition.