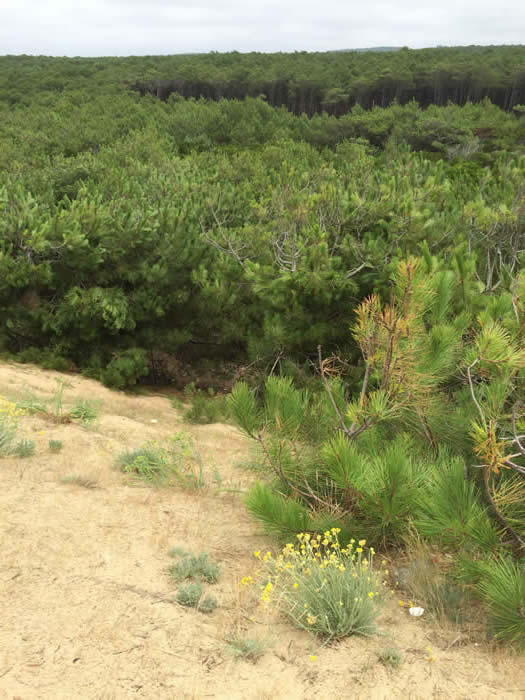 Looking inland from the sea-dunes, pines of the lette before the forest. Curry plant in the foreground

We have just been three days by the sea where the pine forest of the Landes meets the Atlantic on a beach a hundred miles long, dazzling sunshine slowly giving way to a misty sea fret and the relief of a faint breeze.

The Landes, or rather their forest, is a feat of man versus the environment. One million hectares of shifting sand and swampy waste were tamed during the 19th century. It was a desert known only to the shepherds who crossed it on stilts. The first experiment in stabilizing the sands were made in the 18th century, planting marram grass along the shore. Even now when you walk where nothing grows the fine white sand shifts and squeaks under your feet.

But the grass fixed the sand enough to plant pines, the local pin maritime, Pinus pinaster, a rugged two-needled tree with copious resin (collecting it for turpentine became the local industry). In due course they were followed by holm– and cork-oak, by arbutus, phillyrea, sea buckthorn, gorse and broom, willows and of course brambles. All contributed to the sterile dunes in stability and fertility. Their humus turned sand to soil.

Some of the dunes along the coast are still shifting, and so steep that you slide one pace backward for each two that you climb. There is an unexpected smell of curry in the air; curry plant is one of the pioneer sand-fixers. Then comes ‘la lette’, a shallow valley protected from the sea wind where pines, gorse, brambles and willows have a firmer hold. Then the forest, low at first, grows taller as you go inland and humus accumulates. The regular array of pines lets in enough light for what becomes quite a lush understorey. In places the arbutus, shining bright green, is the dominant plant, above acres of ferns.

It is hard to believe that only ten years ago, in 2007, 320,000 of the one million hectares were devastated in a gale. It was a regional catastrophe. There was no means or manpower to tackle the chaos of fallen and broken trees. The price of timber fell with them. We expected to see devastation still – and there are places where land has been newly cleared and cultivated; the sand has become soil enough to raise crops. But the vast expanse of forest, one the greatest feats anywhere of land reclaimed, still stretches to each horizon.