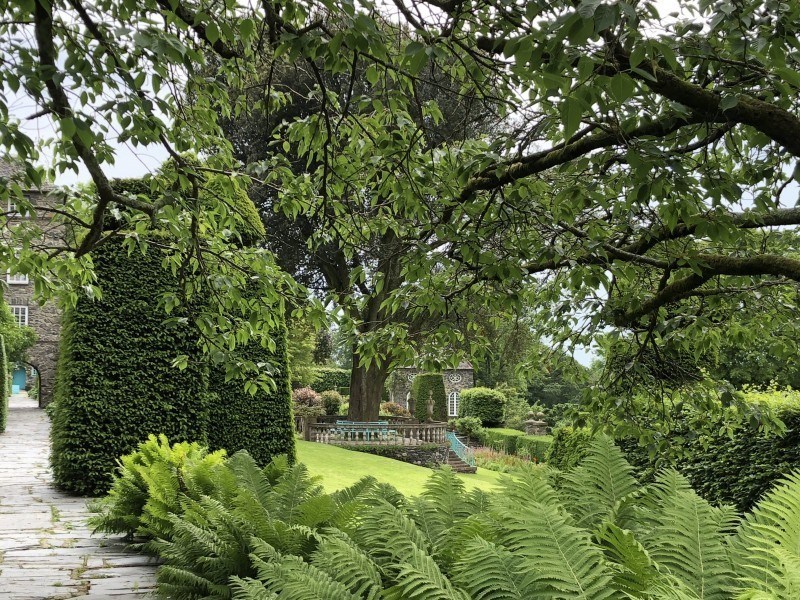 Portmeirion and its stage-set Italy doesn’t appeal to everyone. Dramatic as it is, a poster for the Italian Riviera ingeniously incorporated into the coastline of North Wales, its artificiality, even perhaps its sense of humour, leave some visitors unenthused. I love it. I wish more gardeners played these sort of tricks. What purport to be the civic buildings of a little Italian city are nothing of the sort, but transplanted facades, columns artfully disposed, pastel-painted cottages that are neither Italian nor Welsh but house happy holiday-makers. The boat at the jetty is concrete. But what an elegant joke it all is.

A few miles inland is Clough Williams-Ellis’s real garden, around his serious tall stone house. Plas Brondanw has the poetry that Portmeirion somehow lacks, but it is still too witty to be grand. It incorporates the meadows, the spreading ashes and oaks and sheep, the gentle green boscage of a rainy province, in a series of decorative spaces, paced with cypresses and statues and yew hedges and coloured here and there with borders in quiet harmonies.

The garden is essentially a long terrace across a sharp slope pointing to its eye-catcher, a rocky peak not far off with the symmetry of Mount Fuji. Wrought iron gates in sky blue and yellow (the colours adopted by the Rothschilds, and Roy Strong) introduce a sort of casual formality. Little compartments with ponds and busts on columns and pleached trees take time to explore.

Clough clearly had the builders’ itch – and plenty of stone, dark grey and brown, ready to hand. A sloping avenue leads uphill from the
garden to arrive at a platform above a vertiginous sheer cascade. The path leads on through another high wrought iron gate, under a romantically weeping beech, to climb steeply through massive beeches and oaks towards the peeping tip of a castle tower. And when you get there a species of picnic castle it is; a three-storey tower whose battlements reveal the distant range of Eryri, culminating in Mount Snowdon.

Mr. Milestone would have loved it. He is the landscapist in Headlong Hall, Thomas Love Peacock’s fantasy Welsh country house party, who spouted the theories of Uvedale Price and Richard Payne Knight on The Picturesque. Was Clough inspired by them or was he simply having fun? In any case at Brondanw he achieved the ultimate, the capital P.