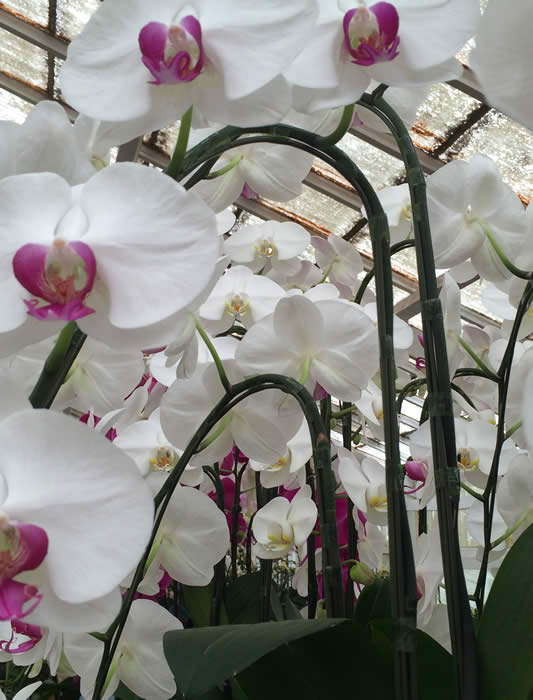 'Phals' off to Beverley Hills

Do you have a pale-flowered orchid hovering nearby, in your bathroom, in your office, in the lobby? If it needs occasional watering, it’s a plant. If it doesn’t, it’s a pseudo-plant. You can also tell the difference by touching it.

The story of phalaenopsis, and its metamorphosis from rarity to banality, was told me in a California greenhouse where rows of identical plants stretched to the horizon in colour batches from white to fire-alarm magenta, green, cream, ginger…. anything but blue. There were monsters and miniatures, dressed by the right so that their identically-curved stems formed tunnels along the benches. At one end a team of Mexicans were potting up hundreds more. They were needed for a party in Beverley Hills.

The secret is, of course, micropropagation of stem cells of hybrids with lots of ploids. (My attention wandered during this part of the tour.) There are dozens of species, from the Himalayas to Australia; between them, it seems, almost anything is possible, and since the 1980s orchid nurseries have been on a roll. But so have whatever you call the nurseries that do fake flowers: the distinction is becoming blurred.

The purist in me sees the multiplication of varieties, and the endless novelties with their twee names, as a sort of betrayal. This is not what gardening is about. I would rather struggle to cultivate a creation of nature in all its simplicity than choose between the latest colour-ways of something man-made. Am I just being po-faced? Or has it nothing to do with gardening?