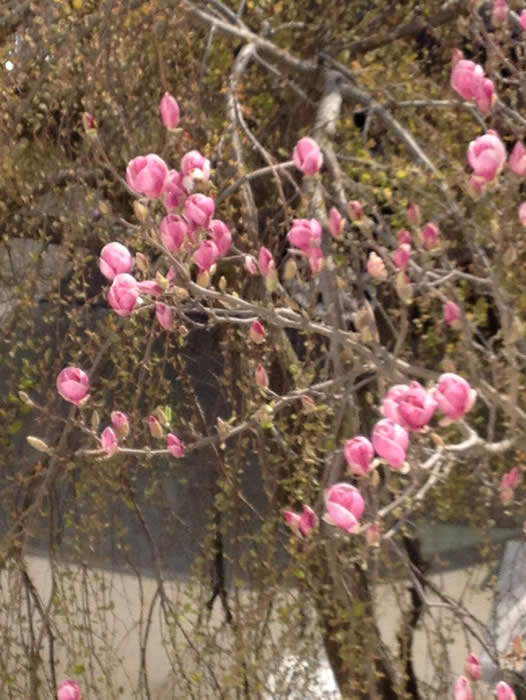 This won’t be news, because we’re all experiencing it – in England, that is – but a diary is for putting things on record, and a record is surely what this is. The Magnolia soulangeana over the front door was shedding its bud scales and turning purple in the last week of February. Last year I noted its date: April 14. Six weeks is a quite a leap.

Japanese maples (some of them) are opening their leaves, our precious cercidiphyllum is turning its special shade of russet-going-green, and Jasminum polyanthum, which usually waits until February in the conservatory, is flowering in the open air. There are anomalies wherever we look; most of them welcome. The fear of frost is acute, but all the more reason to enjoy this absurdly precocious spring.

The hawthorn is supposedly the harbinger of clout-casting in May. I have planted two, in tubs flanking the door from my top floor study to its tiny roof garden to shade it from the summer evening sun. They have been harbinging away like billy-o for two weeks now. Did I plant the Glastonbury thorn (C. monogyna ‘Praecox’) by mistake?

Last month I illustrated a double pale pink camellia that flowered here just before Christmas, and asked for its name. A faithful Japanese correspondent has obliged. It is apparently ‘High Hat’ (who gives them these banal names?), a sport of what the Japanese consider the greatest camellia of them all: Daikagura, known to have been bred before 1789. The name means the sort of dance ritual performed in spring in remotest Japan to ward off evil spirits. My pen-friend even sent me a video-clip of country-folk capering in dragon kit.

“High Hat’ (it has the virtue, among others, of dropping its flowers promptly when they’re over) in turn begat ‘Conrad Hilton’. As my friend says, from 600-year-old folklore to hotel magnate via two flowers. Japan. meanwhile, has been shivering in the opposite to our weather. Poor Yamanashi, the prefecture with the vineyards near Tokyo, recently caught 114 centimetres, or 3′ 9”, of snow in one night. Another record.