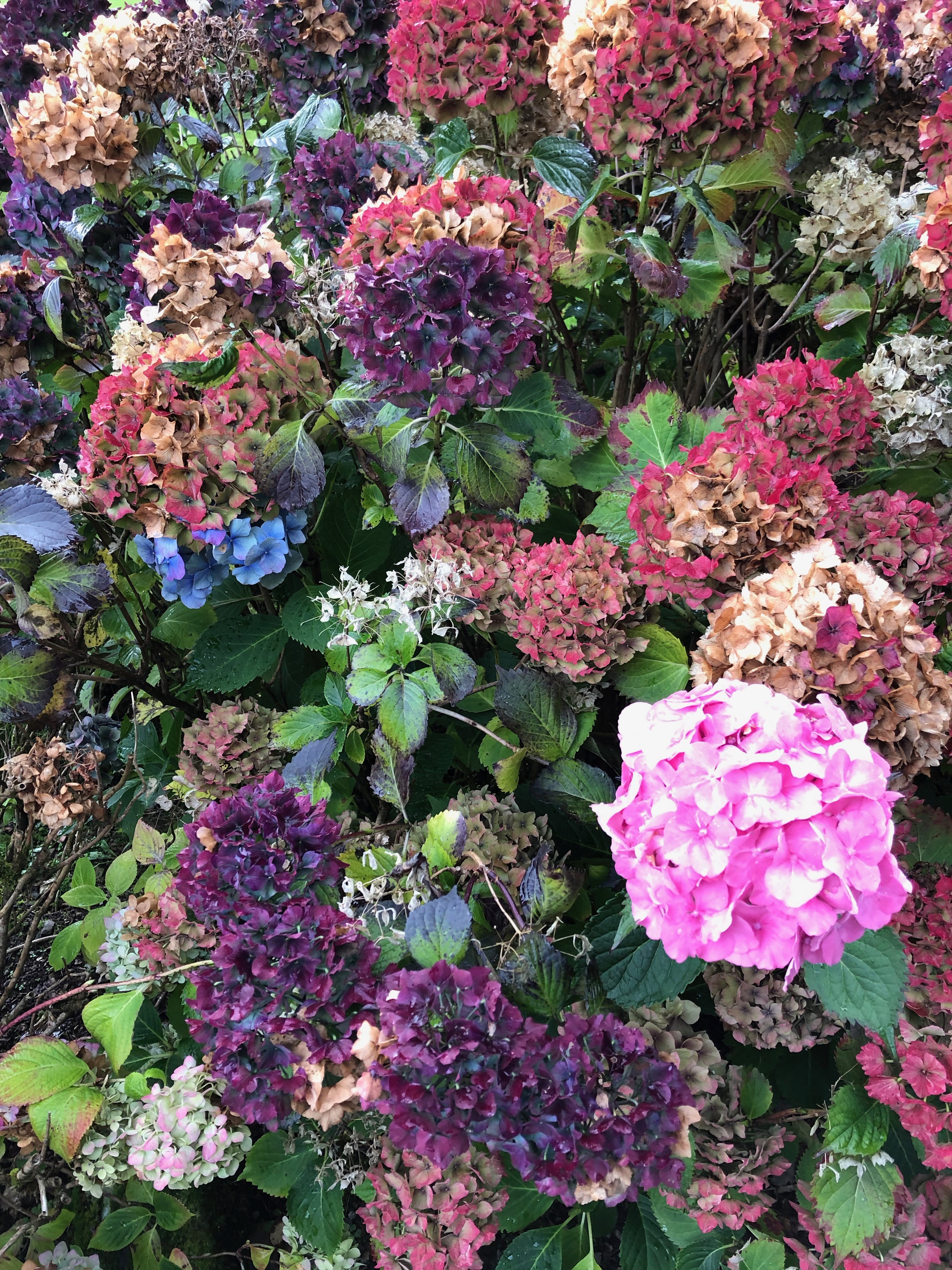 Minds of their own?

Somehow hydrangeas always pop up in Trad at this time of year. It’s partly their duration; what flower is so much in evidence for so many weeks? Even spent and faded flowers keep their shape and remain a presence in the garden. But it’s also the conundrum of their colours. It’s all very well saying they will be blue in acid soil, pink in alkaline. You can control this, they say, with aluminium salts. Oh, yeah?

They have minds of their own. Our Welsh resort has ancient clumps that have settled down over the years to a marvellous medley of colours, by autumn principally maroon and dusky purple, but with individual flowers still at extremes of the blue/pink spectrum. And this is rain-soaked acid soil. So is the soil the answer? If it were grapes and wine we were talking about, we’d be discussing terroir.

The British shy away from this essentially French concept; both the word, which has no precise English translation, and the idea that certain soils in certain situations can affect the qualities of the fruit they produce. There’s a suspicion that terroir is just muck and magic with a French accent, designed to prove that only La Belle France has the conditions for great wines.

If soil can affect the colour of flowers, though, can it not affect the flavour of fruit? Plant a vine of, say, Chardonnay, on chalk or on slate and you will get two quite different wines. Plant it on the Jurassic limestone of Chablis, a pale, quite heavy, soil visibly made up of minuscule ancient seashells and you will get wine of a recognizable flavour that no other vineyard has ever, as far as I know, achieved.

Scientists have been keen to show that vine roots have no way of abstracting minerals directly from the soil they encounter. The only demonstrable difference between soils, as they affect the plant, comes from their permeability; how fast they drain, which in turn affects their temperature. Warmer soils equal riper grapes. If claret from St Estèphe has more acidity and ‘structure’ (or less perfume) than claret from Margaux it’s because St Estèphe is lower down the Gironde estuary; the river has deposited more stones in Margaux and carried more silt down to St Estèphe. Silt equals clay, equals slower drainage, equals cooler soil. How simplistic that is. How does it account for Château Calon-Ségur and Château Cos d’ Estournel consistently tasting different?

It’s not that simple. If there were an analogy between vines and hydrangeas our wines could all end up somewhere between maroon and purple.