The subtropical north Posted on September 29, 2008 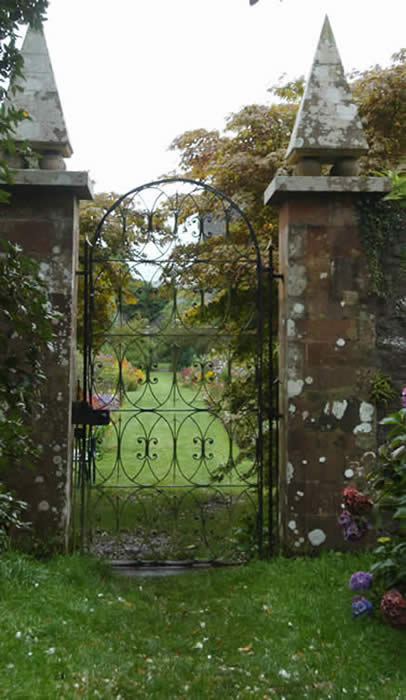 Just home from a weekend in Wigtownshire. That’s the first time I’ve ever written that, and I feel the word wet should come into it somewhere. But no, Stranraer was sunny, and so was Ayrshire when we visited Culzean en route from Prestwick.

Culzean produced the first surprise: its name. How come I had never heard of the prime treasure of the National Trust for Scotland? Because you pronounce it Cullane. Imagine Powys Castle perched on a cliff top facing, across an untroubled sea, the Isle of Arran and the Gibraltar-like shape of Ailsa Craig, Robert Adam rooms and a close-to-subtropical garden. The subtropical theme only intensified as we drove south, eventually, to Logan, in the final south-western spear of Scotland, where the Edinburgh Botanics have their most exotic outpost, 300 miles north of the Scilly Isles (but you’d never notice).

So it was a weekend of envious awe, mighty specimens of our conservatory treasures thriving among plants I didn’t recognize at all. Every 20 years or so, they told us, it really freezes and they lose precious plants, but frosts strike the Canary Islands occasionally without depleting their flora.

An extremely exotic garden is like a museum; you marvel and learn but it is hard to engage. The garden that captured my heart was a great domaine in just that state of marginal decay that induces romantic sympathy. Castle Kennedy occupies a ridge between two lochs near Stranraer with an unexpected Hanoverian signature: massive earthworks carved and scythed smooth in clearings in the woods reputed by legend to represent the battle plans of Marlborough’s war. Apparently the second earl of Stair found his regiment unemployed in barracks and turned them out for a bit of digging.

That earl’s castle is now a ruin, but remains the centre of gardens with long rides of hydrangeas and camellias, rhododendrons and Japanese maples under avenues of oak and (in one case) giant monkey-puzzles. Its centre is a walled garden, isolated (as Scots walled gardens usually are) from any habitation, and all the more dreamlike for standing alone in the midst of woods.

In late summer all its tender colours were on display; flowers from South Africa and South America, tall watsonias and luxuriant fuchsias, salvias with small flowers in primary colours, dahlias and kniphofias, a giant euphorbia fifteen feet across, roses in their softer second flowering ……. but the harmony matters more than the botany. Davina, the dowager countess (still of Stair) patrols these borders with a painter’s eye. They glow with the light of horticultural passion. It is a garden I shall recall many times – and imitate so far as I can.