The German Riviera Posted on September 19, 2011 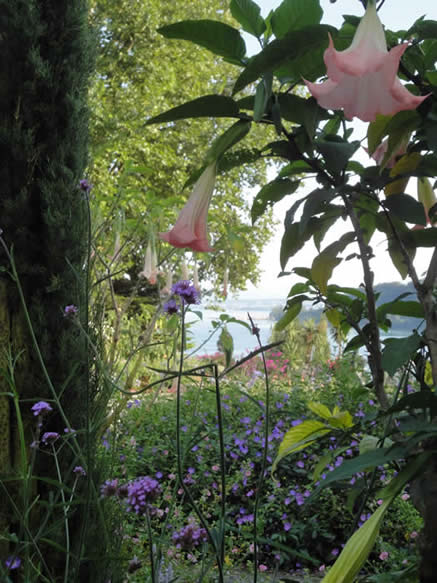 Back from a dendrologists’ outing of one of those blessed parts of Europe where trees find exactly what they need and grow to their full potential. High rainfall is nearly always part of the recipe – but so be it. It was an inspiring visit – and not just because of the trees.

Weep, Wisley. Gnash your teeth, Hyde Hall. There is a magic island garden that outshines you. Not, for sure, in every department: not for variety of plants or of horticultural idioms. But for design, cultivation, taste and above all setting Mainau has no peer in this country. It is the Tresco of Germany; an island with a privileged climate at Germany’s southernmost point, on the country’s biggest lake, bordered by Switzerland and Austria, surrounded by orchards and sheltered by Alps.

The castle and garden of Mainau were created in the 19th century by the Grand Duke of Baden and continued by the family of the Kings of Sweden, the Bernadottes. Jean-Baptist Bernadotte was the most fortunate of Napoleon’s marshals; a solder from Pau who was elected King of Sweden and whose family is still in place. The late Count Lennart Bernadotte was a naturalist, a dendrologist and a natural gardener. His daughter Bettina is now queen of the island, which is run as an environmental and educational trust.

Count Lennart inherited a near-jungle of huge trees towering in each others’ shade. He calculated the precise effect of removing almost half of them, tree by tree, drawing projections of the probable effect of each removal. Today the arboretum seems ideally spaced, the lawns between monster cedars and sequoias and oaks perfectly proportionate. You approach the schloss along an alley of giant tulip trees. Glimpses of sails on the lake below draw you across emerald lawns between soaring cedars to a hayfield on one side; a rose garden on the other; the epitome of a German lordly estate where agriculture and horticulture are easy partners. In fact it is much more: an institute for developing high horticulture and teaching ecology side by side.

The trees were reason enough to visit Mainau, but even hardened dendrologists were awed by the flower gardens by the lake, from the thousands of dahlias, in banks and swirling borders by the water, to softly-contoured enclaves of subtle planting, of grasses and late daisies and salvias that merged with meadows and woody groves.
What park or garden in England, we asked ourselves, has settled so many questions on the marriage of garden and landscape so harmoniously?