Everyone else seems to have been there. Already, at a dozen years old, it has had its own exhibition at the Garden Museum. The Jardin Plume, just east of Rouen, was our first stop in a week of inhaling French gardens.

The critics are right: the Feather Garden is a breakaway. A flat field and the remains of an orchard calls on the uncompromising French tradition of open-sky formality (think of Vaux le Vicomte) and brings it right into the eco-present of undulating grasses.

Convention seems irrelevant here. You enter through a mere gap in a hedge in a field – into a modest nursery. You pay your modest fee and find yourself guided by immaculate (but undulating) box hedges into a jungle where the flowers and grasses meet above your head. You are eyeball to corolla with familiar and unfamiliar flowers; here a pennisetum, there a verbena or thalictrum or even a hydrangea. Grass cut paths set the structure, then narrow hard paths induce you into a world of creatures green in tooth and claw, where touches of colour (flowers often tiny in relation to their supporting plants) merge into a pointilliste picture. Those dabs of red are a six-foot sanguisorba, the purple rockets a veronicastrum taller than any you have seen and the soft mauve splashes a soaring phlox.

Perhaps it was the summer of endless rain that had made perennials abnormally tall. But that is only the prologue; there are many chapters to come.

The main body of the garden is a series of plots of tall grasses (here and there a clump of meadow flowers) separated by smooth mown paths. They stretch away with only a few apple trees to offer your eye a stopping place. At Vaux le Vicomte, I remember (the scale is different, but the concept similar), the immense floor is not compromised by trees of any sort. Here your eye is offered a focus and a resting place by a square mirror of water, unplanted and unadorned, in the foreground. Around the broad parterre stretching to the horizon are the classical enclosures; potager, flower garden, cloister garden, all reinterpreted for a post-impressionist consciousness.

Nor is everything as graminaceous as the name implies. The cloister garden is entirely grassy: just huge miscanthus clumps forming a swaying hedge around another square mirror pool. But the Summer and Autumn gardens are more or less formal adjuncts to the farmhouse where straight box hedges enclose flower beds in an almost traditional way – until you look in detail at the choice of flowers and the way they are grown.

The potager is the most traditional, in combining vegetables, fruit and flowers in a way we never seem to master in this country. Some of the colour-play here is subtly contrived: different phloxes, for example, with pink clematis and the contrasting cool lemon of Oenothera odorata. Other passages are just plain jolly polychrome.

It didn’t dawn on me until we had been wandering in delight for an hour that we were being seduced by the most fundamental game in gardening, from classical times to our own. It is the interplay of the precise and the nebulous, the architectural line and the wandering spray, the box hedge and the flowering grasses, that defines the art. 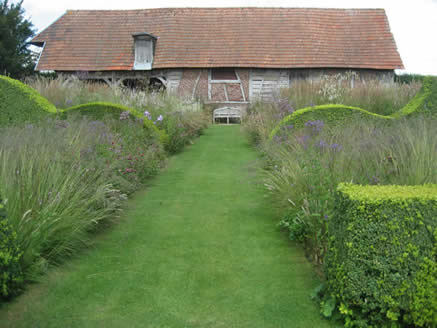 The Jardin Plume: interplay of the precise and the nebulous