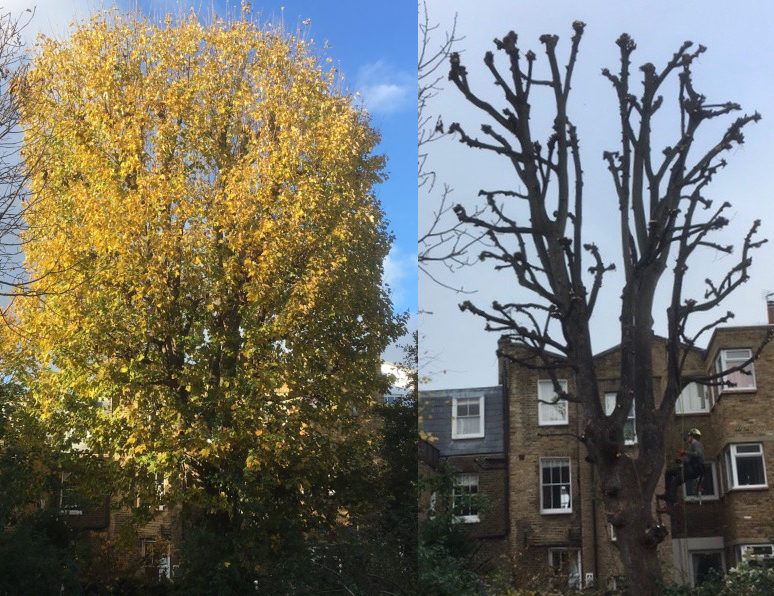 Yesterday we stripped the sycamore: stripped it, that is, of all its annual vegetation, every yellowing leaf, every little twig, down to its bare skeleton. It’s the annual maintenance of a big urban tree. It has to be sanctioned by the local authority, and the entire harvest of last year’s growth has to be carried through the house, up the garden stairs, into the narrow hallway, round two corners, out of the front door and the front gate to a trailer in the street. It doesn’t come cheap, but it’s a great spectator sport.

Fergus is the team captain. His main striker is Blondie, the climber, a six-foot broad-shouldered athlete. He spent four hours up to fifty feet from the ground reaching out into the entire canopy with his (admittedly small) electric chain saw. You could mistake its sound for a hair-dryer. If he had left a single twig of this year’s growth up there it would have started to take over as a new leader of the whole tree.

Fergus has two henchmen to collect the immense quantity of wood raining down from Blondie’s operations. The vigour of an annually frustrated tree is astonishing: the longest ‘twig’, if you can use that word, measured fifteen feet by two inches in diameter. Blondie had to aim it, thick end first, through a gap in the lower branches onto a diminutive piece of paving, where it was immediately seized and dismembered with Fergus’s knife-sharp billhook.

As I discover when I’m filling the council’s canvas bags with prunings, you can fit very little in unless you chop it fine. Bob and Alberto, the two assistants, were kept constantly busy for four hours chopping and carrying and packing the trailer solid. When Blondie finally swung himself down on his harness the tree was denuded: a great black sky spider.