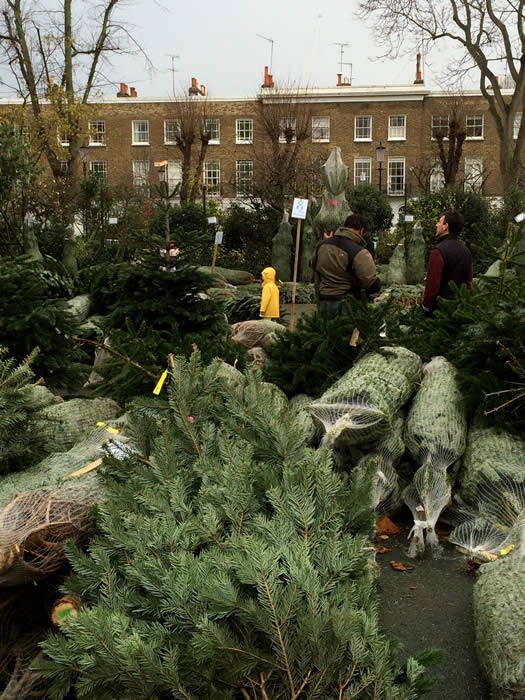 The tennis court in the square is covered with Christmas trees, some with nylon jackets, ready to deliver, others being appraised for height and spread, colour and smell. Rassell’s, our favourite nursery, just across Earl’s Court Road, owns Pembroke Square and its tennis court and turns it into a Christmas tree bazaar each year. In this shirtsleeves winter, it’s a busy spot.

When was it that Santa took a closer look at the forest and realised he could improve on the standard Christmas tree? Until a few years ago, your British Christmas tree was the Norway spruce, Picea abies – presumably because the British forest was full of them, and the even commoner alternative, the Sitka spruce, Picea sitchensis, is so drawing-room-unfriendly, with needles that would penetrate a tank.

We were choosing our tree yesterday and were spoilt for choice, with Douglas fir, Noble fir, Scots pine or Nordmann fir on offer. Abies nordmanniana, or Nordmann fir, wins – although I gather American connoisseurs will pay a premium for Abies fraseri. The poor Norway spruce lost out after a century of service because its needles fall off, as we all know, once the Christmas hearth has got going. Indeed, loosely-attached needles are a problem with almost all spruces. Fir trees are apparently better made.

There are other considerations, though: we all want a slender spire, but some are more densely branched, more or less droopy, softer, shinier or more fragrant. My choice for smell would be Douglas fir, but it looks a tad too relaxed. Pines, with their spaced-out bundles of needles, simply look wrong hung with shiny balls and candles and little angels. Noble fir, Abies nobilis, a noble tree indeed in a forest, is very stiff and blue and tends to have long bare shoots between the whorls of branches. So Nordmanniana, sleek and dark shiny green, with short, soft needles all round each shoot, if not amazingly scented, is the one coming home.