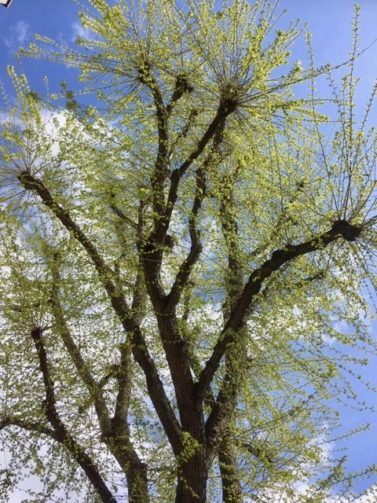 Signs of hope: even an old elm in the street is springing into lffe

They’ve laid off the gardeners in Holland Park. It seems a bit of an overreaction to the new virus that is making everyone so nervous. Gardening is surely an activity that (with due regard for ‘social distancing’) offers very little chance of cross-infection. A team doing the bedding may all be squatting or kneeling within touching distance of each other, but the cleaning, tidying and controlling jobs of the spring are on the whole individual. Are we going to let lawns grow because it’s too dangerous to get out the mower?

Foresters, I’m happy to say, seem to be made of sterner stuff. They are out on the hills with sacks of saplings and the sharp spade they use, with one hand, to cut a notch in the soil, lower in a tiny tree, then stamp the notch shut with their boot. A practised planter can plant at least 500 trees a day, or more if the ground is clear of rocks and brash.

The park is still open for walking, with the exception of the Kyoto Japanese Garden. It would be hard to keep two metres from anyone on its narrow stone paths. This is the moment when its maples are at their most poignantly beautiful, intricate in detail, dramatic in posture, so brilliantly and intensely green they could be fountains of chlorophyll. As the magnolias drop their petals and the camellias fade, the sequence of cherry blossom reaches its climax. There are white breakers of spirea, green daggers of iris and flashes of orange and black from the carp circling in the pond. There is no one to see them, or to listen to the cascade that tumbles on in solitude as though it were really a mountain stream.

I have inspected every street tree and every front garden on my walks and tried to name every plant. Most are the show-plants of spring the local nurseries sell. Now and then I see something I can’t place. In Lexham Gardens there is an exceptional broom, maybe fifteen feet high, that answers no official description but Cytisus scoparius, the “Scotch’ broom. It is not only taller than any I’ve seen but also lusher in its green and super-abundant in its flowers. Discoveries like this keep me looking.