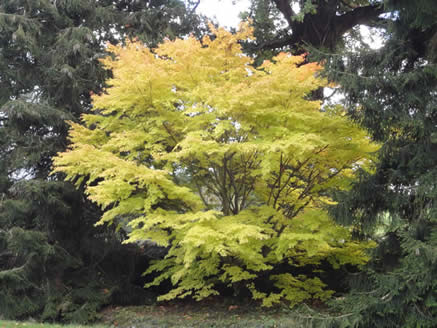 Mid-October and still no real sign of autumn. The last-minute salvias in their brilliant range of primary colours are as good as they are likely to get before they are stopped by frost. Most gardeners seem to agree that it’s hardly worth the trouble for something whose flowers you will only enjoy for two, three of maybe four weeks – but you wouldn’t say that about a spring bulb, would you?

The only trees that are clearly signalling their intention are the predictably early leaf-droppers: Prunus sargentiana is reddening, Fraxinus ‘Jaspidea’ yellowing (but Fraxinus ‘Raywood’ – see my Tree of the Month – only just starting to flush at the top). It was very different in Herefordshire last weekend, on a visit with the I.D.S. to one of England’s greatest maple collections, Hergest Croft, for a maple (or Acer, as we anoraks call them) study day. The climax is still some way off, but the many forms of Acer palmatum and japonicum are certainly firing up. Acer ‘Sengo-kaku’ (‘Senkaki’ to me, and probably you) has already reached its special pitch of delicate pale yellow. It was à propos of its name that Lord Ridley declared there is a special circle of hell for botanists who change long-honoured names.

We learned how to sow maple seed (as quickly as you can, complete with its wings, before it dries out and goes dormant, in any damp but open compost. Leave outside for the winter, keeping rodents at bay). How to do that? Aha: attend the Rodent Study Day.

Grafting came next – and is something I am going to try. A fascinating hour was passed contemplating (photos of) maple flowers. Does any family of trees have a comparable range of flower designs and colours (and seasons)? Far from their leaves in their extraordinary variety being the only attraction of maples, their flowers, fruits – and of course barks – make every other genus look positively pedestrian.

The stop after Hergest Croft was Llanover near Abergavenny, where Robin Herbert, former president of the R.H.S., has been collecting trees for 50 years or so. It was here that I photographed the coral-bark maple illustrated above. (Easier to call it that than to get back into the Sengo-kaku/Senkaki tangle).

I had never expected to see Quercus alba, the American ‘white oak’, as a big tree in Britain. The books all say it doesn’t work here. The Llanover specimen is not a monster, but large, handsome and vigorous. Among many marvels (one of them the rare American butternut, Carya cordiformis, a 60 foot tower of butter) we saw a huge Viburnum cylindricum from the Chinese Himalayas. The USP of V. cylindricum is its big ovate leaves, covered with a thin layer of wax that takes a signature perfectly. Hillier’s manual warns against hooligans signing them – which I suppose makes me a hooligan.