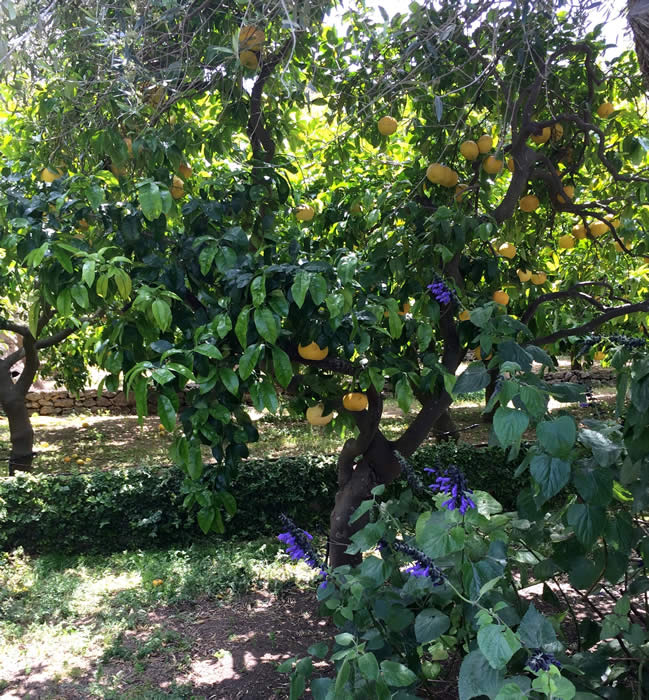 One is out of bounds

The garden of Eden, being we suppose somewhere in the Middle East (Noah, after all, grounded on Mount Ararat) and with a sub-tropical climate (the apple being, let’s say, an orange), made a big thing of water. My imaginary Eden certainly does. No doubt the Creator opened the heavens whenever the gardener thought a nice shower would bring on the beans or the aubergines, but I see the water supply being organised into pools and conduits, with here and there a bubbling spring or a sparkling cascade. The dappled shade is provided by fruit trees, the best authorities say palms, and an arboretum of perpetually-flowering trees of convenient stature.

What’s more, I’ve been there. Last week, in fact. It is in Sicily. We went with an IDS tour to see the rarest trees of the island, and were guided to this paradise between Siracuse and Catania, where the fertile land sloping directly to the Ionian sea has been tragically trashed by heavy industry; the land of the Cyclops is now an oil refinery. But a little inland and a little uphill, with the cone of Mount Etna on the northern horizon, the orange groves that give us blood oranges still spread for miles. Among them lies my Eden, San Giuliano, its guardian angel Rachel Lamb, trained at the Cambridge Botanics and now director of this heavenly place.

The symbolism of the garden is clear – at least to me. The gates open on to a nightmare of ferocious spiny succulents, a cactus confrontation to deter the doubtful. Then comes reassurance; a calm passage of trees in lawns. Then the gate to the gabinetto, the garden of sensual delight, where plots of every desirable plant, for scent, for use, for colour or consumption, are interspersed and nourished by a grid of brightly running rills. At the entrance water gushes in an arc from heaven (or at least an elevated spout), overflowing a big stone basin to feed radiating streams. The streams, some of them tiny, shining ribbons three inches wide, rush or glide like veins and arteries among the lush-growing plants. From time to time a shower of volcanic dust descends to fertilize the soil.

Intimacy is the essence of a gabinetto (the word can mean cupboard, closet, loo, laboratory; almost anywhere private and privileged). This is a series of small rooms within an orchard on the edge of an orange grove. A high stone lookout seat gives you the long Etna view; look the other way and the orchard envelops you. There are little clearings for vegetables and herbs, here a garden of salvias, there an alley of pink grapefruit trees festooned with roses, a snatch of English lawn or a brimming stone watertank. Shade and soothing sound shut out the harsh Mediterranean world. It is easy to understand how Adam forgot that one of the trees was forbidden.