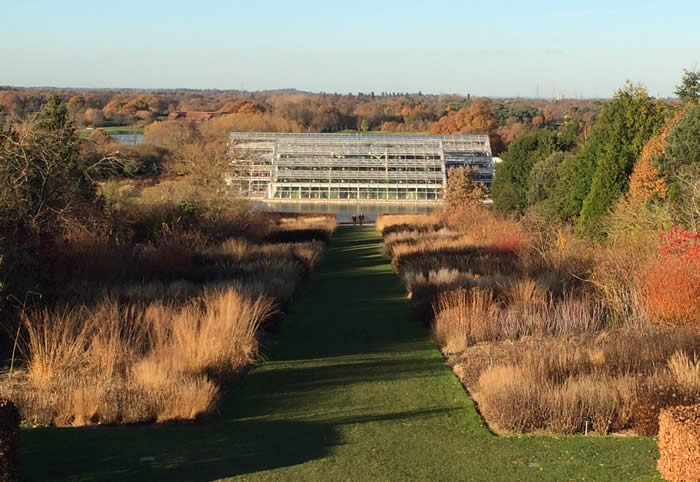 Grasses in December sun in the glasshouse borders at Wisley

Its darkness, not lack of interest, that keeps me out of the garden in December. There is plenty to enjoy when you can see it. So how much precious garden space is it worth, I was asking myself, devoting to plants “of winter interest”. If that means their one virtue is winter-flowering, with eleven nondescript months, probably not much. Besides, the roster of all-rounders is pretty limited: you can enjoy Mahonia ‘Charity’ and Viburnum x bodnantense in everyone else’s garden. Camellias, too – at least in this neighbourhood. Not everyone, I know, relishes delayed gratification, but my most absorbed moments just now are spent looking for future promise. It’s the swelling bud that hypnotizes me, more than the picturesque wreckage of last year’s growth.

Having said that, I have just paid a visit to a garden where the ebb and flow of the seasons is on unselfconscious display. Waltham Place near Maidenhead has been an Oppenheim family home for almost a century, but also functions as a laboratory and school for ideas of sustainability and biodynamics that are rarely played out for all to see. The Head of Education told me it is also used as therapy for people suffering from dementia, with encouraging results.

A morning of drizzle and mist dramatized its qualities. Winter here is a much of a celebration as spring – or if that is over-egging it, as much of a statement. It is a picture of plants in their plenitude – and past it. Tall grasses, sere and pale, play a large part in December (as they do at Wisley). The bright squirrel brown of beech hedges seems to give off heat, and the red stems of Siberian dogwood to blaze in the mist. Everywhere there was something that called me over for a closer look; many seedlings, of course, with their green look of promise, even if their fate is to be weeded out later.

Following the phases of the moon is routine here. I was shown two mature hedges of Lonicera nitida, one solid, chunky and full of leaf, the other half-bare, with dying branches and naked twigs. Both, I was told, were trimmed in autumn; the first at the proper phase of the moon for pruning, when the sap is in the roots, the second at the wrong moment, with the sap risen. Was the gardener reprimanded? I am an agnostic in such matters, but I shall look up nervously when I next get out my shears.