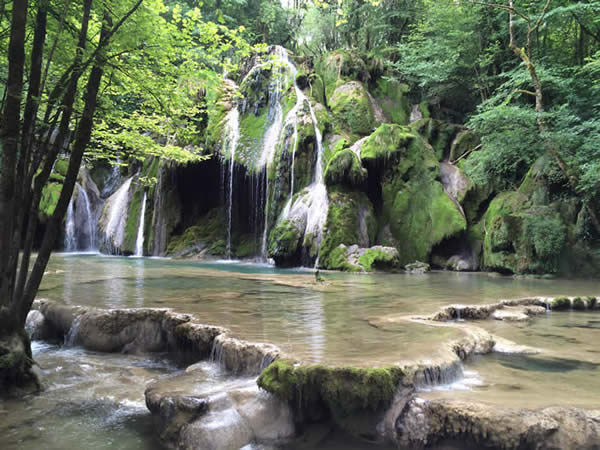 Top: the Cascade des Planches, and below it Stourhead

It’s the sound of God washing his world. Gently rinsing it, rather, with a night of unemphatic rain. I am out on the verandah at midnight, mingling the scents of orange blossom and Pauillac, my bedtime glass. The rain is a cocoon, soothing away all other sounds. Time to reflect on a month away on visits to gardens, houses, churches and the seaside. A dry month, at times too hot; hence the luxury of this healing rain.

My iphone has become my chief remembrancer; shameful to admit, but the snaps in its camera are my garden notebook; more than that; almost my diary. What’s more it knows where and when I took them.

It tells me that in the past month I’ve been to the Loire, Burgundy, Arbois in the Jura, Champagne, Kew, Suffolk, Exbury, Dorset and Stourhead.. The photographs recall people, plants, places…but in that fatally selective way that (if you’re not careful) screens out more complete memory. It’s an obvious trap. We laugh at Orientals and their selfies in front of iconic views: endless smiles; how many memories?

There are, of course, occasions when photography becomes the main object. Then I will circle round an object, or investigate a garden or a building, for hours in the hope of a telling angle and the right light. The camera fills up (only it never seems to) with alternative shots that are impossible to edit properly on its tiny screen, and are usually disappointing downloaded at home. Choosing the best shots of a sustained session takes longer than the shoot itself.

My favourites from July? A wonderful waterfall we found near Arbois on the river Planches, where a cascade crashes out of a forest to form a staircase of pools and line them with marble-like tufa. An octogenarian topiarist in Burgundy carving yew piéces montées in blazing sunshine, a cave of ancient wine bottles belonging to an avant-garde sculptor at Jasnières on the Loir. Then our old garden and woods in the Auvergne, a German military cemetery in Normandy with a thousand mophead maples in parade order in the rain, a girl in a restaurant in the Jura, the magnificently austere cathedral of Laon in Champagne, isolated on its hilltop, and back in England, sailing down the Beaulieu River past Exbury gardens, Christchurch Priory and Sherborne Abbey for glorious medieval vaults, Stourhead for its lake and its magnificent tulip trees. You can travel a long way and see no finer sight than Stourhead. 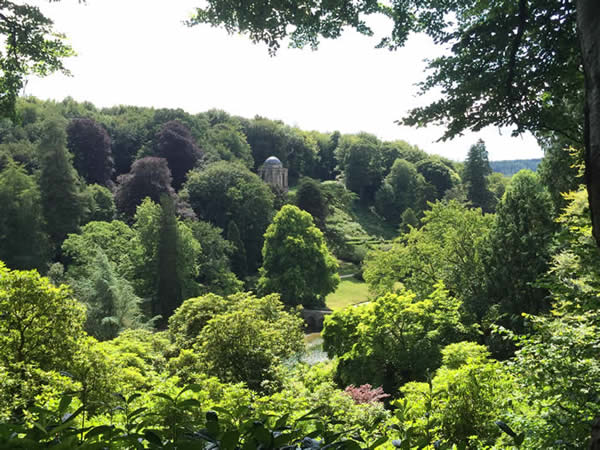