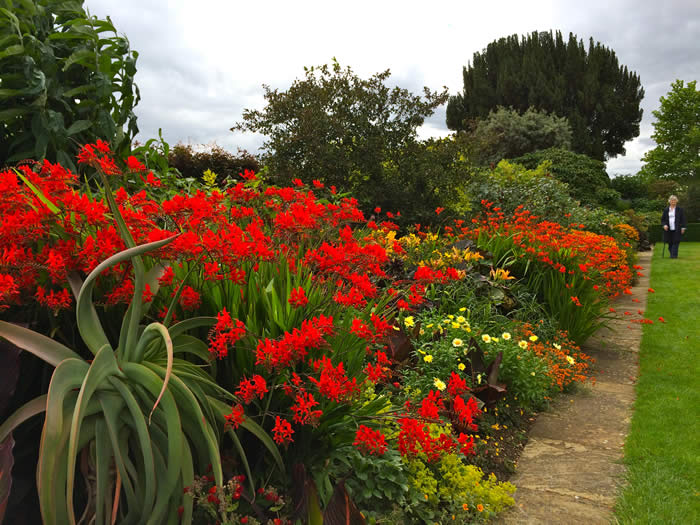 What catches the eye? Crocosmias at Bourton House, Gloucestershire

Why is red such a tricky colour in the garden? Use it accidentally (out of a mixed seed packet perhaps) and you throw a random emphasis onto the spot where it lands. It grabs the attention. It is intended to. Red is the colour of danger, of domination – and of painted lips. Use it deliberately and you can dictate where people look, influence their whole reaction to the picture you are painting.

The huntsman’s red coat is one of the oldest tricks in landscape painting. Turner famously infuriated Constable by painting a red buoy in the foreground of his sea painting to upstage his rival’s elaborate and highly-contrived Opening of London Bridge hanging next to it. What’s more, he did it as an after-thought, on varnishing day, as an act of provocation. That’s the power of red.

Why does red do this to your eye? Chromatically speaking, it is so close to green that, dogs tell me, they can’t tell the difference. And yet it appears to us as green’s diametrical opposite. It lies at one end (the longest-wave end) of the spectrum we can see, with the quiet violet at the other end. Are ‘quiet’ and ‘noisy’ valid descriptions of colours?

In a garden, red indicates your policy, if not your philosophy. Christopher Lloyd at Great Dixter changed tack completely when he abolished a rose garden with its colours in gentle harmony and brought in cannas and dahlias and everything strident. It amounted to a career move; out of middle-aged respectability and convention and on to the cutting edge.

Myself, I’m leery of it. I’ve never painted a door red – almost alwaysclean but bashful colour we call ‘chateau grey’. Light has a lot to do with it: hard Mediterranean light takes strong colour in its stride; bougainvillea is an example. Plant it in our island’s softer light and it looks like an accident in a paint factory. On the other hand, one can’t have too much of that scarlet pelargonium Roi des Balcons in the window-boxes of the Black Forest or the Tyrol.

In my timid garden, on a ground of as much green as I can manage on walls of yellow-grey London brick, white is a pretty daring colour. Cream to blue, and pink so long as it’s pale, are as emphatic as my delicate sensibilities can entertain. Sometimes I remind myself of Lizzy Bennett’s father, who said something like ‘A small pullet’s egg, lightly boiled, is not unwholesome’. Rather daring, though.