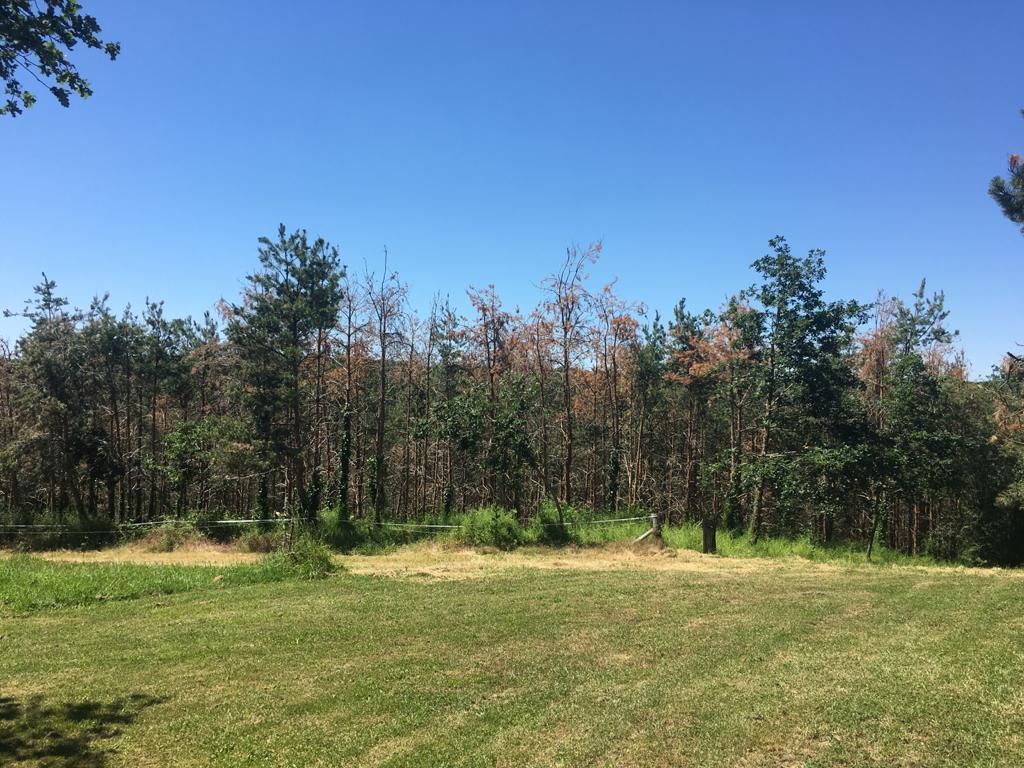 Just the edge of it

A friend who knows me well once said “You really are arboreally insatiable.” He was right. I can’t see a space without thinking what tree would suit it, or a tree without thinking of a site for it. Over the past sixty-something years I have planted or caused to be planted thousands of trees in dozens of places, and tried to keep track of their progress. Start early, is my advice. I started at nineteen, so I have fifty foot oaks to my credit. They’re no better of course than anyone else’s, but the mental zoom from sapling to fifty-footer is exhilarating.

But when things go wrong it can be devastating. I’ve just heard from the friend in France who bought our property in the Centre fifteen years ago. With encouragement (not to mention grants) from the French government we planted something like seventy acres with oak and pine, Scots, Corsican and Maritime. The friend rang to tell me that over fifteen acres of Scots pine are dead. In France they are not ‘Scots’, they are pins sylvestres, wild pines, and indeed they are native everywhere in Europe from Russia to Spain.

Our old place has some steep slopes. One just behind the farmhouse scared me every time I took the tractor out to mow it. I should have left it to sheep, but I wanted to tame the broom and gorse. My old Massey Ferguson was what I called the sports model: no cab, not even a roll bar. Several times, turning on the scary slope, I almost baled out. Its soil was appalling, just shallow grit over granite.

Eventually we planted it with pins sylvestres. They far exceeded my expectations; twenty years later they had made a dense wood of straight trees. Then Mark phoned me. They are all dead, first dried by drought and heat, then mined and killed by a bark beetle I had never heard of, called in French Scolyte. The beetle takes advantage of the desiccated tree and in one season it is dead. I googled scolyte, to learn far worse news: tens of thousands of hectares in the Vosges mountains, the Moselle and the Meuse have been devastated, their spruce and pine ‘scolyté’. Their dry timber has little value; the forests must be felled and replanted, as many were after the First World War. Perhaps they should be planted with species from the Midi, accustomed to hot dry summers. Perhaps we should all be thinking along these lines.