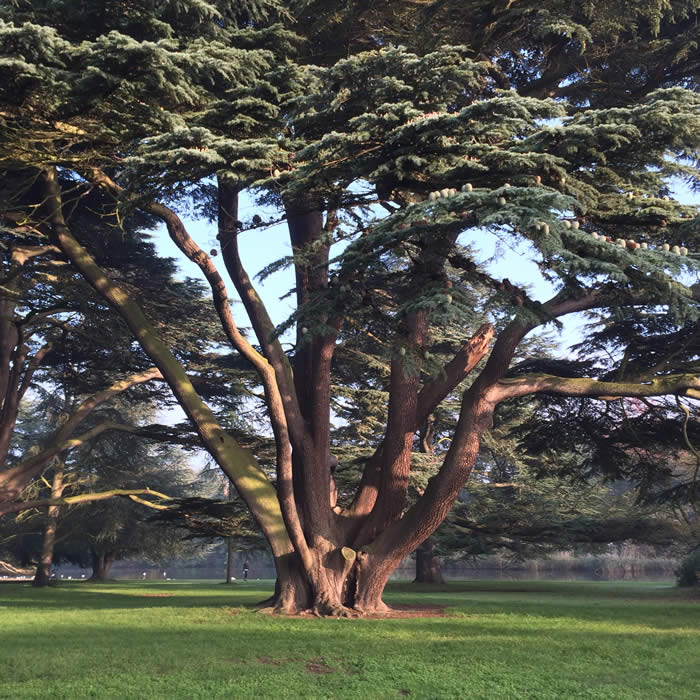 This is by far the biggest cedar I know in London

Here am I, a Londoner born and bred, a resident for half my life, a committed gardener who fancies he knows something about architecture, a life member of the National Trust – and I had never been to Osterley Park until last Sunday. I had supposed it was just a sad remnant of a great house stranded near Heathrow and bisected by the M4. We arrived to find pure England, left-behind England, unsullied parkland with magnificent trees round a house on a near-ducal scale. Yes, the motorway rules out rural silence, but if you can stomach the aircraft at Kew or Syon they are no worse here.

Osterley is a friendly park open to the neighbours (and there are plenty) all year round. It is a farm with a herd of cows grazing meadows apparently never ploughed, and a real farm shop selling its own produce. And it has a garden becoming a fascinating recreation of 18th century taste. In the borough of Hounslow, twenty minutes from Kensington.

We arrived through an autumn mist that veiled the surroundings. As we walked up the drive, skirting a lake noisy with water birds, the sun pierced the mist, low in the afternoon sky, to outline half a dozen serious cedars of Lebanon, trees that must be contemporary with the massive red-brick house. It was a memorable moment of discovery.

The National Trust can do things so well. You could believe the owners were still in charge – though they left at the end of the Second World War. The 350 acres they gave the Trust is more than the extent of Kew Gardens; enough to feel like real countryside. The Tudor stable block is where you feed and buy your souvenirs, happily free of advertising and bossy notices. The house (with much of its Adam interior intact) shelters you on wet days, and the garden has the unmistakable sense of renewal by imaginative hands. There is a plantsman and a researcher at work here.

You can see it in the ordering of the flower-beds, awkward perhaps to our post-Jekyll eyes, but precisely what Georgian gardeners appreciated; each plant a solo performance. It is clear from the labelling of the beds. The American garden reflects the excitement of newly imported exotics from the American colonies. The walled kitchen garden is a cheerfully productive playground for vegetables and flowers and fruit jumbled together. New tree-planting round the park is original and unexpected – clearly a plantsman’s work. And the mile-long promenade round the great meadow and into the woods must be wonderful in spring with its meadow flowers and bluebells.

The head gardener is Andy Eddy, originally trained at Kew, then at Sissinghurst, and now with a ducal domain of a garden where he can play duke – and duchess. I shall soon be back.