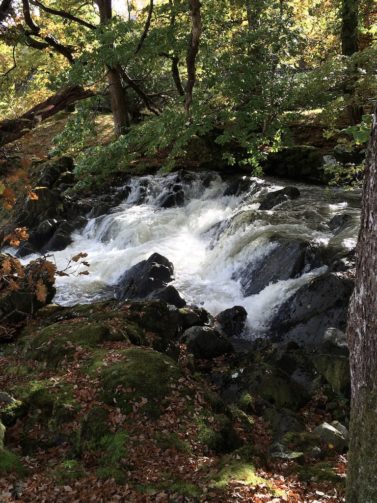 Falling, crashing, roaring, spraying water will always have a public. I read somewhere that cascades, fountains, breaking waves and anywhere water is violently fragmented create negative ions (don’t ask me more) that feel good and stimulate your brain. Case – as far as I’m concerned – proved. I assume it also applies to the bubbles in champagne.

Travelling for Pleasure is a book by Tony Newbery about the exploration of Snowdonia by artists and miscellaneous Romantics in the late 18th and early 19th centuries There were poets and painters on the lookout for the perfectly Picturesque view, as defined by William Gilpin. ‘Just a few yards to your right, to include that mossy stump’. A fair number of preachers took to these tracks too, rain or, occasionally, shine. Roads were rudimentary and inns appalling, but it was worth it for the scenery (variously described as ‘sublime’ or ‘awful’) of mountain, moor, forest and particularly, waterfalls. The early tourists made competitive comparisons, scoring them for setting, height, volume of water (and noise), accessibility and general air of romance.

There is a different competition these days: kayak potential. If you can paddle to the edge and drop twenty feet into a deep pool you have an alpha fall. Thirty feet is pretty sensational.

One of my favourites (not for kayaking) is the Black Falls (Rhaeader Ddu in Welsh) near Ganllwyd on the edge of the huge forest of Coed y Brenin. It is not huge; it just plunges in beautiful oak and beech and birch woodland over and through a great granite jumble. It has had its admirers since some anonymous Romantic installed a stone slab overlooking it engraved with a Latin verse and its translation by Thomas Gray (of the Elegy in a Country Churchyard). Could it have been Gray? I have sat in wonder watching the local lads take the plunge in their kayaks, steering to the edge of an upper pool , then disappearing in white water before bobbing up from the depths of the black pool below.

There are bigger and noisier falls in the forest around but none so aesthetically as well as athletically pleasing. To drink sparkling wine in the cocoon of its sound is one of the high romantic pleasures.

TripAdvisor of the time: If ever you go to Dolgellau, Don’t say at the Lion Hotel. There is nothing to put in your bellau, and no one to answer the bell.