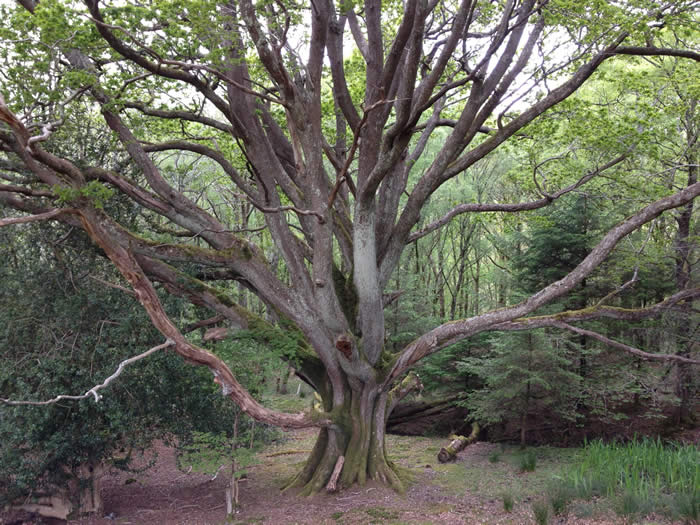 Each year we try to time a visit to our Welsh woods to see the bluebells in their glory – hopefully in concert with the blue rhododendron augustinii we have infiltrated among the beeches. Last weekend was almost the bluebell climax; they still had a little way to go. The rhododendrons, on the other hand, seem to be better at time-keeping: they were perhaps a week past their peak. We call them blue, but the colour of French lavender is a closer match.

The Snowdonia spring, our neighbours tell us, is three weeks late, or (seeing it in a positive light) three weeks longer than usual this year. It is the most beautiful ever : the sky is azure, the opening leaves of oak and beech olive, russet and that most tender green, scarcely shade the woodland floor where bluebells in millions and clumps of primroses compete with the fresh fronds of ferns. In damper shade the little white stars of wood sorrel are like timid wood anemones. Locals say there is a relationship between wood sorrel and copper – which rings a bell at Cae Gwian: a projected gold mine here in the 1840s (we still use the old grey stone building) turned out to hold nothing but copper after all. What flowers would gold has favoured?

The next valley to ours, running north-south down to the estuary of the Afon Mawdach, has been bought by the Woodland Trust. Its name is Cwm Mynach, the valley of the monks (of the Cistercian Cymer Abbey at Dolgellau).Its secluded meadows, hemmed in almost completely by steep hills and dominated by the cliffs of Diffwys, a 2000-footer, must have been some of the loveliest in Wales before the foresters arrived. The Woodland Trust is dedicated to restoring the ancient oak woodland now brutally invaded by conifers. They planted spruce, larch, douglas fir and the hideous (and useless) lodgepole pine under the oaks with the object of shading them to death. Often they succeeded, but veteran oaks still persist, and in the remaining open meadows show how magnificent such sessile oaks can be.

We started the rescue and restoration of our own oakwoods at Cae Gwian nearly 20 years ago now. It’s a long job, but hugely rewarding.