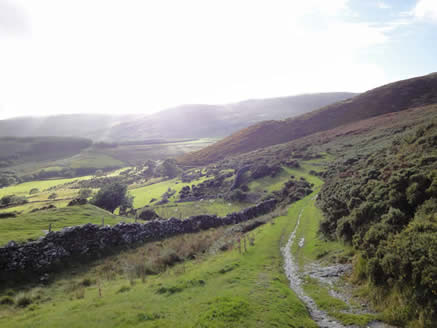 A noble one-stone henge greets us as we descend into our wooded valley in North Wales. We extracted the thick slab of brown granite from the roadside and set it up at the entrance to the forest when we arrived 15 years ago. This time, though, we had a shock : some anonymous artist has defaced it with a huge white eagle – at least I think that’s what it is. At first sight it looked more like a swastika.

We have washed off what we can of the paint but the shape is still there. I’d like to know more about it, but no one seems to know. Is it the sign of some Welsh anti-English underground ? I’ve never seen it before, and neither have our Welsh friends and neighbours. Perhaps it is just the invention of the artist faced with a tempting blank stone surface ; in which case chapeau to him for an icon combining the Prussian eagle of the First World War with the swastika of the second. If we ever meet I’ll know him by his tattoo.

It won’t be too long, though, before the rain and the lichens erase his work. Speed of change is the thing that always strikes me most in the timeless sheltered world of the forest. Saplings double their height while your back is turned. Paths grow over in a season with grass, rushes, bracken, brambles, gorse and birch. Moss covers tree trunks and conceals rocks. Our latest contribution to the cycle of alteration is a new track to give us access to a steep part of the hill planted fifty years ago with a tree now considered pretty much a weed ; a strain of lodgepole pine from California that is neither fast, nor handsome, nor useful, but is unfailingly fertile with its seedlings.

There are ten acres or so of it interspersed with larch and spruce on the steep bank facing west towards Cardigan Bay. Before we made the track we had never seen either the trees or the view. Wyn and Arfon, the bulldozer brothers we rely on for heavy machine work, have contrived a route crossing the contours of the hill at the gentlest, most insinuating angles. When I first saw the prospect their work had revealed I wanted to live there, right there between the trees and the sea, for ever. Prospects here, though, are almost as evanescent as paths. Even on land left unplanted first birch blocks them, then rowan, then, faster than you would believe possible, the deep shining green native sessile oak.