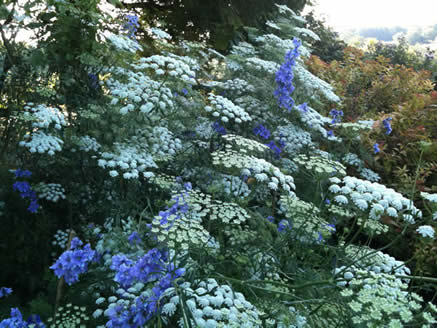 Bishopweed and larkspur at Gravetye

Gravetye Manor in the Sussex Weald was William Robinson’s home for fifty years and his workshop for the ideas he first expressed in his hugely successful earlier books, the Wild Garden of 1870 and The English Flower Garden of 1883. The English Flower Garden went into fifteen editions in his lifetime. No doubt the cheques from his publisher, John Murray, paid for much of the 1000 acres of woods protecting his paradise. (I found a first edition for sixpence at a village fête many years ago).

When he died in 1935 he rashly left the estate to the Forestry Commission. The condition of the woods three generations later does them no great credit. Gravetye had a renaissance as a hotel in the 1960s until the turn of this century in the hands of Peter Herbert, a perfectionist and conservative hotelier. Since he retired in 2004 there has been a lull, but hearing that the new owner is once again taking the garden in hand we visited in July.

There is a great deal to do (the garden covers 30 acres) but we were delighted by what we saw and heard. The Great Garden and Little Garden, with their doors directly from the house, once again have a Robinsonian feel; the sensation of an exotic meadow profuse in tall flowers. Uniting the borders, filling much of the space with its foam of white umbels, is
Ammi majus or bishopsweed (or lady’s lace), perhaps as a rapid space filler while other plants mature, but in any case a seed I can’t wait to sow. There are masses of cosmos, of blue larkspur, campanulas, tobacco, aanemones, romneya and vetch: lightweight plants that none the less add up to an extraordinarily festive summer scene.

A memorable feature of the Great Garden, west of the house, is the broad bank, perhaps 60 feet wide, that separates it from the croquet lawn. Is there a bolder border anywhere? The clumps and drifts of semi-wild plants are heroic in scale; the effect exactly what Robinson intended by his invention of the Wild Garden.
A young gardener, his shoulders emerging from the towering tapestry, turned out to be a Breton, trained at Kerdalo, then at Great Dixter, and working his way round England. England, he told me, is the only place to learn gardening. William Robinson’s first book was Gleaning from French Gardens. How appropriate that a Frenchman is gleaning in his surviving masterpiece.