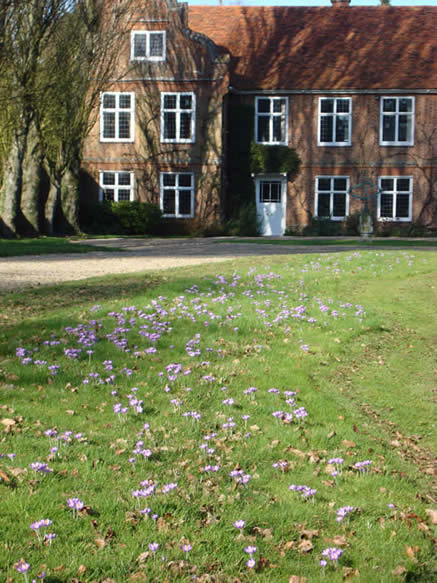 Snowdrops, of course. They signal the start of everything, in their chilly way. The warm feelings of spring, though, start with the first crocuses, which, in this garden, are C. tommasinianus.

A lugubrious friend told us, many years ago, that they were a pernicious weed. I saw them carpeting an orchard with their piercing purple and saw, absurdly, danger. The summer ground cover in this orchard was ground elder, so perhaps it was just the association of ideas. I didn’t take them seriously, in fact, until I saw a mighty river of them at Benington Lordship, a picture I can summon up in an instant: a great path of purples, darker and paler and intricately flecked with orange and gold.

I resolved to copy it, and four years ago planted 2000 in a band twelve feet wide along one side of the front drive. Now I’m reaping my reward.

Crocuses make you long for the sun to come out. They will stand patiently for days like little rockets on pale stems waiting for the clouds to pass. The moment the grass glows with sunlight their petals tremble, part and spread, eager for the bees. In no time, from nowhere, a working party arrives and forages every flower. The show is over then; the flowers are spent, sheaves of leaves take their place, not to be mowed (I have made this mistake) until they become invisible in the springtime grass. Next year you will have double the concentration, the beginnings of a proper rug, and cheeky adventurers for many yards around.

Catching the sunny day is of course the problem part. It will be your day in London, or taking the car for its service. It never occurred to me until last winter to plant a big shallow bowl of them and bring them into the kitchen when their pale points appear. Trustingly they took the (halogen) ceiling lights for sunshine, grew and opened, then shut again, repeating their performance, the kitchen being bee-free, over the space of two weeks. A second wave of smaller flowers followed the first so that we had an enchanted forest to admire at breakfast, lunch and dinner.

The garden crop, meanwhile, only a few days later than those indoors, were suddenly and brutally depleted. One morning I saw that almost all the paler ones, more silvery lilac than purple, had been mown down. Or, on closer inspection, cropped off. Rabbits only nibble; this was grazing on a bigger scale. Muntjac were the felons.

Days later the Radio 4 Food programme considered the problem of the deer population; the highest, apparently since the last Ice Age. ‘Are they safe to eat?’ asked someone – of the food our forebears (or the fortunate ones) ate for centuries before they had cattle. No one, to my frustration, mentioned muntjac, or how their meat is sweetest of any deer.

Is there anything, short of warfare, that we can do to protect our crocuses? I am trying a new product called Grazers, a systemic spray that, once the plant has taken it up, reputedly gives it qualities that deer, rabbits, and even pigeons find repulsive. Do systemics work on bulbs? Is there time in their short growing season? I shall report my findings.