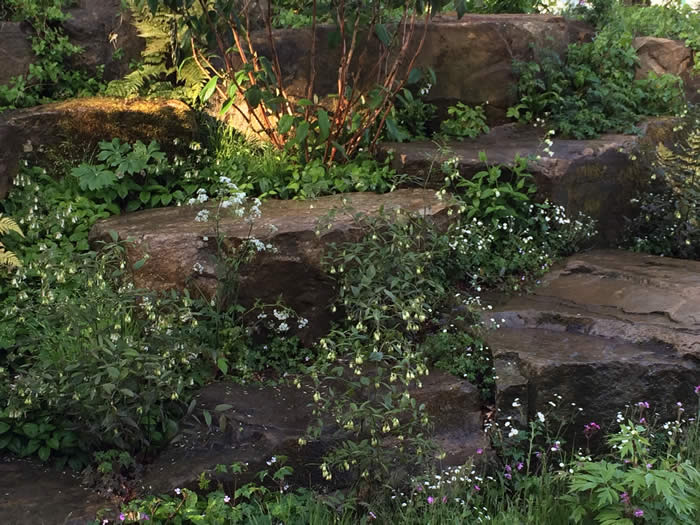 A chunk of Chatsworth

A happy chance took us to the Flower Show on the first fine day of the week, Thursday, when Chelsea was looking at it’s sunny and cool, sparkling, rain-washed best. I feel a heavy responsibility as I ponder the annual Trad Award. (The rules are simple: it’s the garden I like best). This year, for once, I fully agreed with the RHS judges: the Chatsworth/Laurent Perrier/Dan Pearson garden was not just the best in the show, but the best ever in my Chelsea experience.

The feat of carrying a large chunk of Paxton’s over-the-top rockery down from Derbyshire was pretty awesome. We explored the real thing for the first time last summer; even by Victorian standards of ambition the perching and piling of such monstrous boulders on a steep hillside seems, shall we say, a trifle exhibitionist. Nor is the result, I fear, an aesthetic triumph. Far more satisfying and exciting are the natural rocky outcrops at Wakehurst Place.

Dan Pearson’s genius is to extract a subsection, as it were, to install it at Chelsea, and to present it as an exotic meadow garden of wild and not-so-wild flowers. We were told that Crocus, the contractors (who surely deserve their own gold medal) planted the seed mixture on mats which were then cut and fitted into their precisely planned places in the scheme, among the rocks, around the gently-flowering little stream, between the trees and lapping down to the tight-packed crowd of admirers.

Even the dead leaves scattered in the grass came from Chatsworth; romantic realism can hardly go further. The grass, besprinkled like a medieval tapestry with flowers, was thicker here, thinner there, scuffed by feet along a winding path, the gritty soil loose here, compacted there and constantly changing in a floral concerto, ranging from buttercups to peonies, hostas and ferns to eremurus, campion to wild strawberries, primulas, sweet rocket, day lilies, euphorbias, rare irises, geraniums, rodgerias….shaded here and there by field maples, azaleas that looked benignly neglected, enkianthus, a laburnum just showing yellow buds, a huge clipped box bush and a great fat willow pollard impossible to imagine packed up and on the road, A list of plants does nothing to express their happy intermingling. An example: a single Welsh poppy acting the weed, ‘a plant in the wrong place’ among pink primulas, just skews the scheme into complete conviction: this could surely never have been on a drawing board.

One other garden challenged for the Trad Award: the complete contrast of James Basson’s Occitane garden representing the scents of Provence, a little olive grove in a dell, watered by a shining runnel made of rough tufa blocks and splashing into two tufa tanks. In one corner stood a lavoir; a simple shed, also of grey tufa unadorned, playing the cool and shady part a grotto would play in a grander garden. It was a happy idea to dig the whole area to a lower level so the crowds peered down into it.

James Basson (we have worked together in Beaulieu-sur-Mer, on my son in law’s garden) knows when to stop. There is bare earth here, ready for more planting; you sense the humble gardener is just taking a break round the corner. There is enough decoration and detail in a scattering of flowers and the intricate shadows of the olive trees on a little table and chairs. Pastis would probably be the drink in such a tranquil unpretentious corner of Provence.