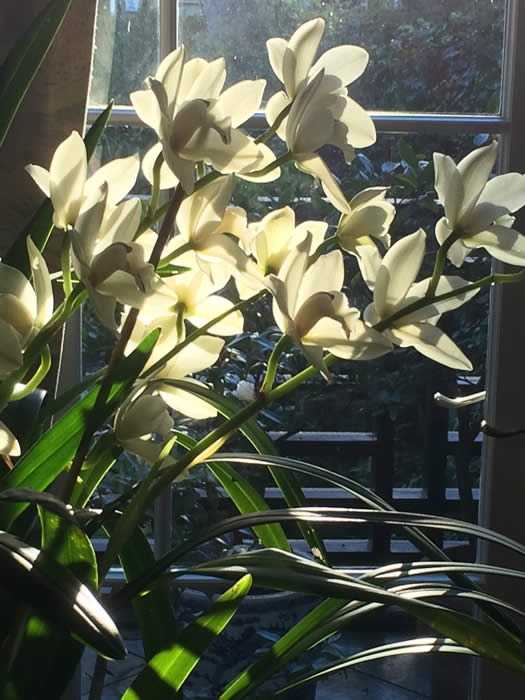 Trad used to do a Plant of the Month, when we had a big garden and many choices. This the first time I’ve done a Plant of the Year – but really it’s a Plant of Many Years; ten at least.

I love orchids for living in slow motion. Writing about a genus so closely and intensely studied is like treading on egg-shells, but this cymbidium (I believe its name is, or was when I bought it, Rum Jungle) has lived in the same modest plastic pot all this time. You couldn’t get a toothpick in among its curling roots. It lives on water and neglect., most of the year in a shady spot behind the greenhouse, where I top up its saucer when I remember, sometimes with a drop of Growmore in the can. (Could I be drummed out of the RHS for offering such unscientific advice?)

I brought it into the greenhouse in October and into the warmth of the house, by a north-facing window, in late November and gave it a little orchid feed. The flowers have been erupting for four weeks now – and of course stay pristine for weeks. Each flower of this rather ghost-like cultivar has a double red line faintly picked out on its lower lip, presumably to guide insects straight to the action.

My sister sees rescuing near-death orchids as a sacred calling and would scoop a tiny pot with a shrivelled phalaenopsis off a skip in the street for intensive care in her kitchen. Actually there is nothing very intensive about it; only patience and a strict regime. No food, almost no water, domestic temperature and refusal to give up. The joy when a tentative bud appears repays months of nurture.