Pilgrimage to the Lancasters Posted on August 15, 2015 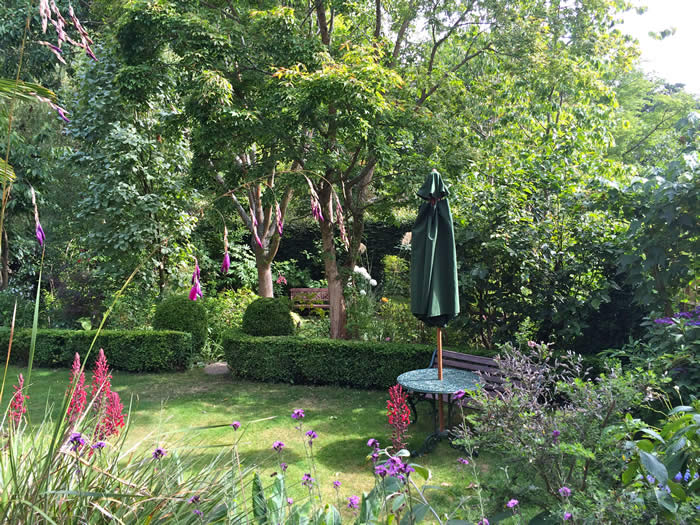 It was déjà vu all over again when I turned into Roy and Sue’s drive in Chandler’s Ford, in a leafy suburb just south of Winchester. I’ve seen so many pictures and heard so many stories. What feels familiar, though, on looking closer turns out to be almost subversively alternative. You know the genus but you never saw this species before. It happens again and again.

Roy is genial, passionate (we all know that from television) and loquacious. ‘Isn’t that a ….?’ you start. ‘Yes, I collected it with (half a dozen well-known collectors may feature here; very often Mikinori Ogisu, his Japanese chum) on Emei-shan’. (I’ve learnt that China’s holy mountains are honorically labelled ‘Shan’. Mount Fuji, come to that, is called Fuji-san; are they related? Gongga-shan, alias Minya Konka, seems to be Roy’s favourite peak.) ‘….It was growing with Abies delavayii, and a daphne, and a lily I’d never seen before, before breakfast one day outsde a village in Sichuan. I’m not mad on rice at breakfast. We’d just seen an extaordinary mahonia with coppery leaves….…’ Perhaps I parody, but Roy’s reminiscences are worth as long as you’ve got.

His selective eye has been focused on woody plants (and not only woody ones) since he worked at Hillier’s Nurseries nearly fifty years ago, I could never have written my own tree book without Hillier’s Manual – and didn’t even realise at the time that this astonishing compilation was newly hatched, the work of Sir Harold Hillier and Roy together. But I owe him for far more than mere knowledge.

He has a thing about mahonias – and things, for that matter, about a hundred other genera as well. I came away from his garden with ‘Roy’s Choice’, a selection of the cross made in the Savill Gardens in John Bond’s days between two Lancaster collections, M. gracillipes and M. confusa. The first has dangling flowers with red sepals and hard, armoured, almost scary leaves, the second an altogether softer look, far more and narrower leaflets and more conventional flowers. The 2013 Chelsea Plant of the Year, Mahonia ‘Soft Caress’ seems to be a variant of a subspecies.

I would never dare plant things as close together as Roy does. He packs a whole botanical garden into a typical suburban one. It looks busy, of course, but still in the way Loudon called ‘gardenesque’. One trick is persuading shrubs to climb the house walls, encouraging them with supports, then clothing them with a climber or two – underplanted with two or three other rareties. The monster honeysuckle, Lonicera hildebrandiana, has shot up and needs hacking back from a bedroom window.