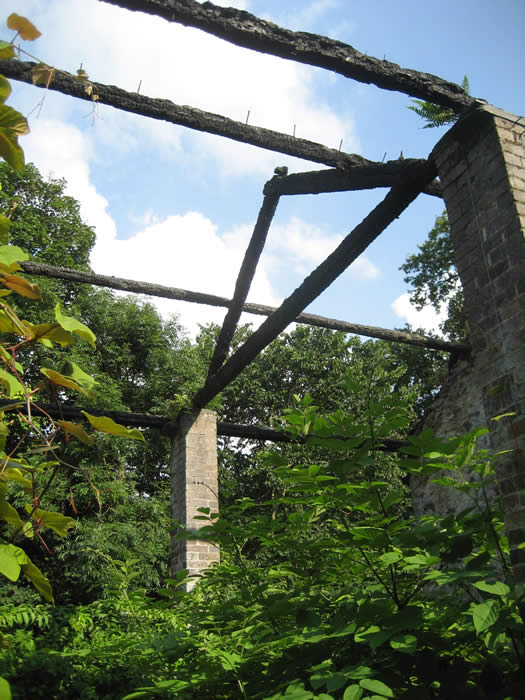 Tea on the lawn on a baking day with the hospitable Bleddyn and Sue Wynn-Jones of Crug Farm plans, the foreground a field of cows, the background the Llanberis Pass deep into Snowdonia. Every visit to Crug Farm is a revelation of plants I’ve never seen before. Sometimes I can spot the genus, very rarely the species: Sue and Bleddyn still don’t have names for half the plants they grow: just accession numbers. And the numbers grow lustily each time they do a trawl in South East Asia or Central America, two of their main collecting grounds.

They list over 60 trips on their website, starting in 1992. They collect friends, too: that day a Belgium nurseryman and his wife, every day a plantsman from near or far agog to see what new things they are offering in their little sales yard, or growing in their propagating tunnels, or displaying in their romantically intricate little gardens between the house and the old farm buildings.

Last year they saw an accidental fire as a chance to add yet another garden. An old cow barn went up in flames; leaving its walls and the remains of its roof as a sheltering spot for yet more new plants whose hardiness needs testing. It is a completely eclectic mix, from maples to lilies – all with a new twist – via fifty things I’ve never heard of. Scheffleras seem to be a Crug signature plant (they list 31 in their astonishing catalogue). Their elegant almost palm-like clumps and fingered leaves caught my eye several times, some with discreet yellow flowers, some with black berries. But it is absurd to pick on any plant, or even genus, in this garden of wonders. We left feeling as though the Creator had had another go with a new designer.