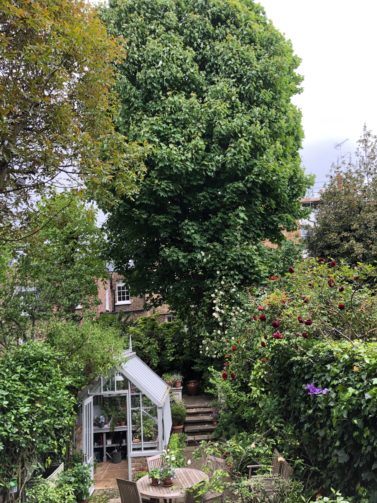 More at home in a park

I think I’ve worked out why this little London garden has a tree in it as tall as the garden is long. It lends a certain gravitas to a modest patch to boast a tree the size of a Hyde Park plane, even if a sycamore is a rather lower form of life. But it was here when we bought the house and we would certainly not be allowed to cut it down. Indeed it’s an annual struggle getting the council’s permission to prune it. Each year we ask RBKC – as we call our local authority – for permission to climb the tree and remove most of the last season’s growth. If we didn’t it would reach out over five or six gardens by now. We then have to cut it into small enough pieces to carry through the house.

Why not, we ask RBKC, an ongoing licence, since the same problem arises every year? But no, Proper Procedures etc….. which this year took so long that it was too late, the tree was in full leaf and we shall have to wait a year in its shade.

At least I’ve discovered its probable story. It’s a war baby. We just measured its girth at breast height: 7” 3’. Following the rule of thumb that most trees put on an inch of girth a year, that makes it 87 years old. Oddly, its ground level is four feet higher than the rest of our garden, and the neighbours’. Its end of the garden has now been paved, with steps up to it. I suspect it was a weed seedling on a compost heap, ignored during the war and now formally incorporated, and an object of rather wry pride.