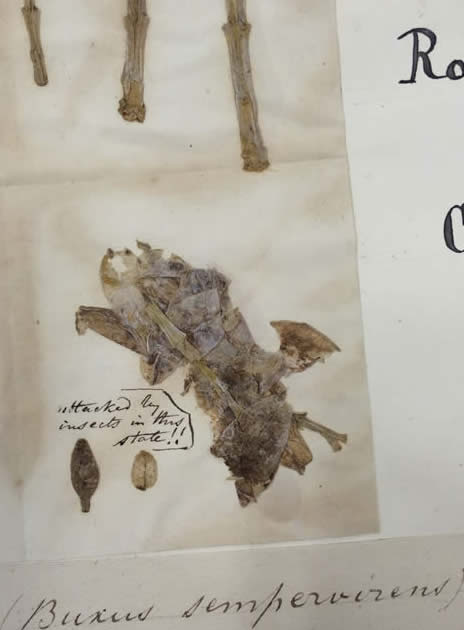 The ancient Romans had box bug problems, too. No sooner had I written my recent column on the menace of the box-eating caterpillar than I paid a visit to the new herbarium at Cambridge University’s Botanic Garden to be shown, by its curator, Christine Bartram, a box shoot under attack – two thousand years ago. John Stevens Henslow, the creator of the garden, found it in a Roman tomb at Chesterford, near Cambridge, in the 1830’s.

It is difficult to overestimate the influence of Henslow, as a scientist (indeed the very word ‘scientist’ for what had been up to then called a ‘natural philosopher’ was coined by one of his colleagues.) Henslow was Professor of Geology, then Professor of Botany in the University. In the 1830s he developed the new, much bigger botanical garden in the country a mile from the first.

His particular interest, in fact his obsession, was the question of what constitutes a species (and what a variety). The religious view (he became a clergyman) was that God’s creation was, you might say, specific. But when he took his pupils round the countryside collecting herbarium specimens their primroses (for example) were not all identical.

He wondered what this  meant. In planting the botanical garden he went further: there is still an imposing group of Pinus nigra as he planted them, specimens from Corsica, Austria and the Crimea: the same species with quite different habits of growth.  All this was in Charles Darwin’s mind when his tutor, Henslow, declined a berth on the Beagle and nominated Darwin to go in his place. It was the origin of The Origin of Species.

Darwin gave his herbarium, collected on the five years voyage, to Henslow. The university has held their two herbaria, along with, for example, John Lindley’s, for getting on for two hundred years. Then came John Parker, director of the garden from 1986 to 2010. He was determined to tell this story and give the university’s unique herbarium a fitting home. I was briefly involved in a fund-raising campaign (the garden had no public building or education space in those days). I remember our application to the Heritage Lottery Fund was turned down (not enough buses from surrounding schools, if I remember right). The Fund’s offices were two streets away; in summer its staff ate their sandwiches in the garden.

What small beer our fund-raising efforts became, though, when the munificent Sainsburys appeared on the scene. Their Gatsby Trust (the Fitzgerald link eludes me) very much got the idea. It sees Cambridge (with the Wellcome DNA institute nearby) as the world centre of genetic studies. £82 million later the result is a laboratory building like no other, in the garden, a splendid affair of stone and immaculate concrete, to house the iconic herbarium and related studies (also a cafe and facilities for public education). The box? It still has problems.