Kew on New Year’s Day has become something of a routine in this family – and judging by the queue at the gate, others too, though how much botany the occupants of the baby buggies take in is hard to surmise. The alpine house is always our first stop, to see tiny flowers of Fabergé quality that you will only see or hear of in such a collection. The Hitchhiker’s Guide to the Galaxy claims the Creator puts his best designers onto designing the Norwegian fiords. I’m inclined to think their job was alpine plants.

Various obstacles prevented our usual perambulation: the funfair side of Kew is at its maximum in mid-winter. Paths are roped off; massive electrical installations and lighting rigs compete with its habitual botanical serenity. There were new smart 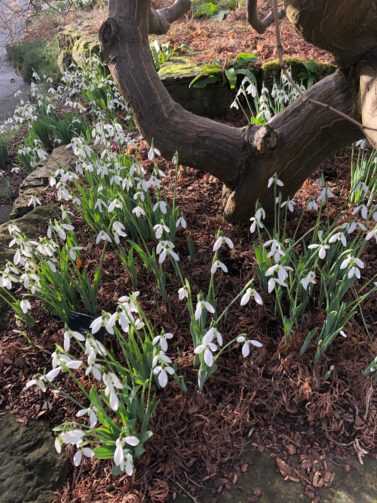 little green and white trains shuttling about, and a demonstration of impressive fountain power was underway. The most unmoved part of the gardens, the most static through all the seasons, are the piney hillocks that represent the Mediterranean flora. Nothing stirs in this evergreen environment; the floor is soft with pine needles; citrus and rosemary, furrowed cork oaks, arbutus and broom maintain a trance-like inertia. This is not where I want to live. How dull, I always think, to be deprived of our seasons and their constant drama.

Very little is in flower in the first week of the year. Cyclamen give the eye a little jolt here and there, and on the rock bank Galanthus elwesii, the first and biggest snowdrop, wears a self-satisfied air. Camellias have tentatively begun their nearly six-month stint. The witch hazels were gathering a crowd; their low mounds of yellow and orange visible far off through the leafless trees. ‘Freesia’ says one visitor with her nose to the little spidery flowers. ‘More like boiled tripe’ says another. ‘Nothing like the oil we put on bruises’ was a third opinion.

By the time we left, though, I found myself tingling with excitement, with the anticipation created by a million buds full of promise. I went home feeling almost like a bud myself, preparing to burst and reveal the complexity of beauty quietly forming, cell by cell, in its predestined design. This one will unfurl as a leaf; this one contains a tiny embryo flower, intricately packed for the surge of spring to swell it open. The paltry potential of my garden, perhaps a hundred plants preparing their performance, is nothing compared with the infinite variety at Kew, yet my mental tour of what’s in store has me tingling all over again.