Neverland and after Posted on November 3, 2016 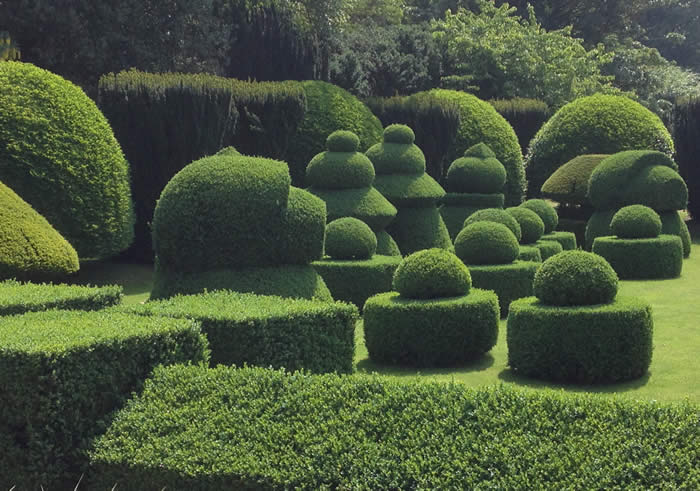 In their time Haseley Court and Folly Farm have both been among England’s most influential gardens. I visited them both in June with the patrons of The Garden Museum. One is a classic of the Edwardian years of Lutyens and Jekyll, the other a masterpiece fifty years younger. But ‘in their time’, it struck me, gives quite the wrong impression. Their time is now.

Folly Farm in Berkshire has been restored with great pains and immense scholarship, seemingly regardless of cost, by Jonathon and Jennifer Oppenheimer. The house is famous in itself as one of Lutyens’s typical excursions into the Neverland territory he shared with JM Barrie and Randolph Caldecott. I have always loved Lutyens, and believe the secret of his juggling with ideas as modern as his contemporary Frank Lloyd Wright and as old as English vernacular materials is really his sense of humour.

He loved catslide roofs, fantastic chimney stacks, huge oriel windows and little dormers in improbable places – almost as though he were illustrating a book for children. In the garden his trademark – or one of them – is ingenious changes of level involving curving, sometimes almost circular steps, beautifully made of mixtures of brickwork and carved stone.

Folly Farm has all these things, originally planted by Gertrude Jekyll, no doubt in her intricate palette of colours. Now Dan Pearson has had a go – and the result is, to my mind, a marvellous match for Lutyens’s whimsical grandeur; decisive, original and harmonious. Small ideas or fiddly colour arrangements would be wrong. Colour schemes are brave enough to embrace massive spaces, and often the plants themselves are supersize, too.

Haseley Court in Warwickshire belongs to a later era, the lean years after World War II. Nancy Lancaster, who made the garden, was the American socialite decorator who gave grand houses permission to be shabby and shabby ones permission to strike grand attitudes.

Her ideas live on, at one end in the Mayfair showrooms of her firm, Colefax & Fowler, still the headquarters of chintz de luxe, at the other in such establishment as the Hotels du Vin, where gaps in the floorboards are justified by expensive soap in the bathroom. Shabby chic signalled aristo confdence; easier to do indoors, you’d think, than out. Somehow just not weeding doesn’t cut it.

Haseley Court became a beacon of good taste not because it was neglected, but because the Lancaster eye used powerful signals of ancestral glories and gardened gaily around them with no apparent inhibitions.

Ancient topiary was a good starting point. Nothing says long tradition like a whole chess set of crisply cut yews. Visiting Haseley with her successors, Desmond and Fiona Heywood, I realised how deep the Lancaster style has sunk into our psyche (or certainly mine). From the walled garden, brimful of what seems random planting around old apple trees, colours from Matisse, to the long canal with green banks under willows, I recognised my own efforts at Saling Hall – or rather what inspired them.

Folly Farm and Haseley Court represent two different approaches, attitudes, indeed cultures. Both have fed into the garden norms and expectations of today – and in turn been refreshed by them.