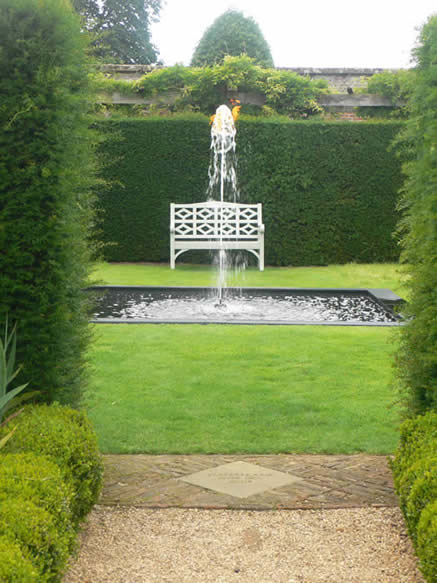 To Norfolk to see the walled garden at Houghton, having heard many excited reports. We were not misled: it is one of the most original and stimulating creations of recent times, a complete reinterpretation of a classic model, to be compared with the Alnwick extravaganza. It feels far more personal though, intimate and thoughtful. You pass from compartment to compartment in a state of heightened awareness rather than wide-eyed awe.

The Marquis of Cholmondeley has dedicated his creation to his grandmother, Sybil (née Sassoon), who reigned at Houghton for half a century. Many years ago we had the good fortune to be shown around the palace (the only word that fits it) by her. She apparently enjoyed giving tourists her personal tour.

Indeed we had the same experience at Hardwick Hall, where the formidable dowager Duchess of Devonshire lay in wait for tourists and gave them unforgettable moments of living history. When she was a girl, she told us, she watched the housemaids taking down the tapestries and carrying them to the ponds in the park to tread them. Now, she said, they have to go the V & A for cleaning: absurd.

But Houghton. There must be twenty rooms in the walled garden, and no repetition except in the immense parallel herbaceous borders of the central alley, a bravura performance, edged with catmint from end to distant end, from vineries to a Bannerman fantasy: a log temple, its pediment a forest of antlers.

The Bannermans also designed the sunken fountain in the centre of the complex,immensely pretty, pink and white rose garden. You sit within a circling flint wall engulfed in the sound of water, an interpretation of the classic grotto in the open air, among roses.Six foot high lilies lean out at you from box-edged squares. Huge paeonies do the same. The herb garden, the vegetable garden, the orchard, the croquet lawn (notice: you are welcome to play) are all included in the pattern, and the playing and punning with plants is inexhaustible. The Waterflame is already famous, but you still blink to see a fountain with flames on top. Nor is the walled garden, of course, all there is to see. The deer park seems to follow a model of its own, somewhere between a park and a forest, with grand trees at a fraction of the usual spacing. I was reminded of Uccello’s haunting hunt in the Ashmolean.

I don’t know whether there is a historic rivalry between Houghton and Holkham, but I wouldn’t be surprised. Are the Cokes of Holkham tuning up for competition? Their vast walled garden is showing signs of vigorous renewal, too.

I’m intrigued by the fact that parts of our coastline can become cults – at least for a while. Not only the coast, of course: we hear plenty about the Cotswolds, and two hundred years ago it was the Lake District everyone talked about. In the 1930s Frinton was the height of chic. Then it was St Ives, and now the north coast of Norfolk is having its turn. Burnham Market has been called Chelsea sur Mer – despite the fact that none of the many Burnhams, nor their neighbours, are actually on the sea. The sea has retreated, leaving long flats of saltmarsh, sand and seabirds, ideal for walking off lunches of Cromer crab and admiring the hundreds of windmills that have suddenly populated the shallows.

Norfolk, however, is naturally rich. Fertile fields are its dowry. Why else would two of England’s most magnificent houses crop up in such unexceptional landscape? Houghton and Holkham are not only the best examples of 18th century showmanship, they are both still very much in business. Their huge estates (and that of Sandringham next door) give coherence to endless acres of well-farmed land and well-dressed forest. Neither, on the other hand, was distinguished for its gardens – until recently.