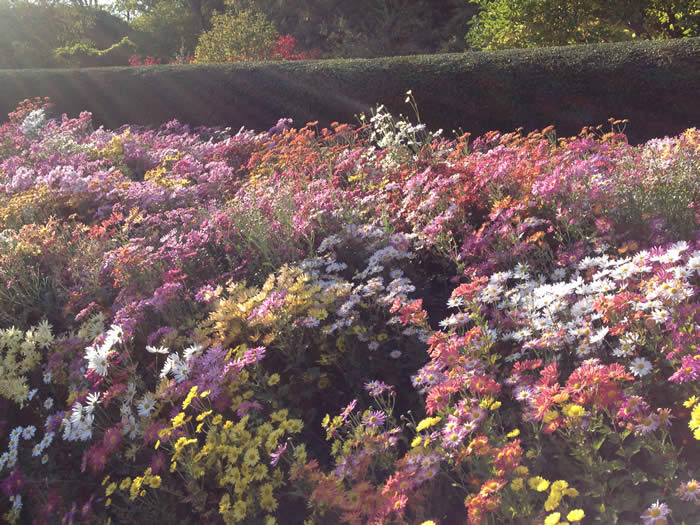 I know I bang on about Central Park, probably once a year, but then it has qualities none of our London parks (I love them too) can match. Seemingly endless paths (trails sounds more American) among huge grey rocks like monster whales and enormous trees, across savannah, skirting lakes and ponds, leading to cafes, kiosks, the boathouse restaurant, the zoo, the auditorium…. and several gardens. The Conservatory Garden, the most accomplished, the most formal and the most complete in itself, is way up around 105th Street, almost in Harlem.

Its centre is an ‘Italian’ design – though it would be hard to find avenues of crab apples around a simple level lawn in Italy. The ‘English’ third is the most intimate, cloistered among yew hedges, sheltering a bronze of Mary and Dickon of The Secret Garden, reflected in a little waterlily pond.

The ‘French’ garden is the October event: an overwhelming display of Korean chrysanthemums, a bank fifteen feet wide right round a rectangular piazza, enclosing the city’s jolliest fountain; three mischievous and nubile young ladies dancing round the water.

The chrysanths were a gift to the city in 1947 as a war memorial. The donor was Mary Lasker from Chicago, a huge benefactor of medical research. They were originally grown from seed, a strain developed by the Park for decades, selecting a wonderful palette of brilliant colours, orange and violet, yellow and white, red and brown. Other gardens show them oriental-style, extravagantly coiffed into pompoms and cascades. Here they are grown as they would grow in some dream meadow, a random medley, not pinched and primped but tilting this way and that, jostling, playing like the dancers round the fountain.

These days I’m told they are grown from cuttings and planted out from 2,000 pots in late May. Not that they are tender, even in New York winters, but they replace the spring bedding of 20,000 tulips. They draw New Yorkers like a baseball game. I’d love to see a really full-throttle Mum Show in England.