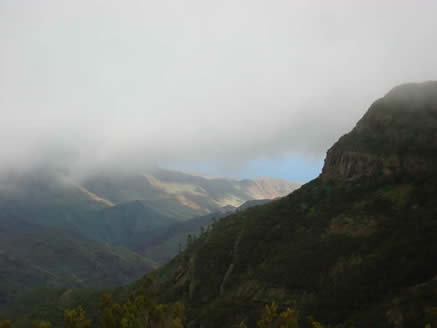 ‘A fearsome maze of eerie crags’ is how one guidebook describes La Gomera. That phrase alone would have tempted me.

I keep hearing different accounts of the Canary Islands: their heaving airports, their lava landscapes, the smell of Ambre Solaire on black sand beaches …… Nobody had said that Spain’s highest mountain (admittedly no Mont Blanc) is on Tenerife, and only one friend, years ago, that La Gomera, 20 miles across the water, manages to include a rain forest in its astonishingly varied flora.

The mid-Atlantic tropics, when I thought about it, should have pretty special conditions. Trade Winds refreshing sun-baked soil – fertile, too, with ancient lava – it’s a promising recipe. For someone who avoids hot climates the idea of a misty mountain refuge from the coast was pretty attractive too. Breakfast in the garden, botanizing in the clouds (or, if no clouds, with distant views to other islands and the snow-capped Mount Teide), tea by the swimming pool and a late Spanish dinner sounded perfect. It was.

La Gomera has the islands’ biggest remaining area of the peculiar indigenous forest known as laurisilva: 10,000 jungly acres. To call it a rain forest is not quite accurate; strictly speaking it is cloud forest, meaning that the trees collect the moisture from the overladen air; the perpetual drip from their mossy branches, rather than conventional precipitation, doubles the measurable ‘rainfall’.

‘Laurel’, Laurus azorica, closely related to bay, is the main theme, supported by half a dozen superficially similar evergreens (the most recognizable being Viburnum rigidum) and the very different tree heather, Erica arborea. In certain exposures at a certain altitude in the hills you are in heather as dense as on a grouse moor – the difference being that it is 30 feet high. One should be there in March to smell it flowering.

Not much of the original forest, growing 60 or 70 feet high, is left: a few stands in precipitous north-facing gullies carpeted with moss or ferns, moss hanging in tresses from the trees. Among the ferns is the far-spreading Woodwardia radicans I remember from the oriel table in the hall at Great Dixter, where Lloyd once kept a specimen three yards across. Absurdly, high in these hills, and on slopes requiring, you would think, the farmers to abseil, smartly built stone walls support narrow terraces now abandoned, showing only traces of corn or overgrown vines. The bananas and tomatoes at lower levels still thrive, but the former athlete-farmers of the mountain now work in the hotels, or in Venezuela.

Ornamental gardening, of course, is a novelty on such an indigent (until recently) island. The style seems to have been set by an artist sometimes called the Picasso of the Canaries, Cesar Manrique. He created a spectacular mirador commanding a deep fertile valley, a terraced trench 2000 feet deep with the Atlantic at its foot, bristling with the Canaries native palm tree, singly or in groves, and stratified with green terraces like vegetative sedimentation.

The mirador grows from the cliffs. Its gardens merge imperceptibly with the mountain plants. Are these aloes, agaves, cistuses, euphorbias, echiums wildlings or horticulture? Bougainvillea gives the game way, but only when savage spikiness forms discernible patterns do you detect design.

We stayed in the parador at San Sebastian, the island capital (and launch-pad for Columbus: the courtyard of the Tourist Office contains the well where he drew the water to baptize America). Spain’s state hotels (or some of them) brilliantly project an image of long-settled aristocracy. You are a guest in a solid, slightly faded, country mansion – in this case with Manrique-inspired gardens rich with endemic plants, shaded by palms and the luxuriant deep green canopy of a pale-trunked ficus. Paths wind and steps climb between curving beds mulched with grey, rusty and pink volcanic gravel, setting off the strong domes and spikes of desert plants. I have not been an enthusiast for palm trees in the past, but Phoenix canariensis is a magnificent tree to have outside your bedroom window. 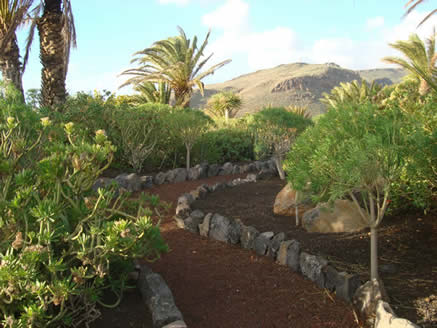