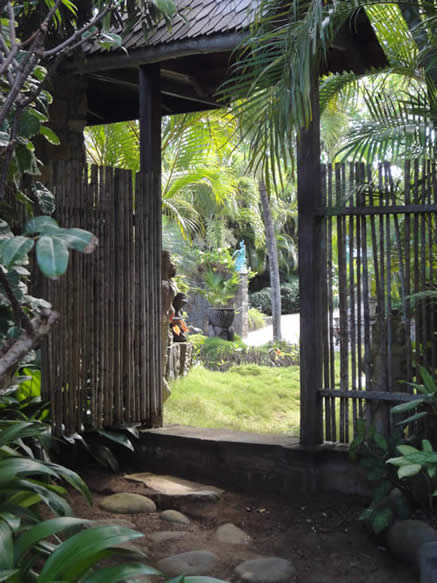 My visits to the tropics have never been anything but fleeting and my impressions of tropical gardens have never advanced beyond confused admiration. Do our gardening rules, or conventions, or idioms, apply? If not, what distinguishes a garden in the tropics from a glorious hothouse display?

We are just back from the legendary island of Mustique, a speck in the Caribbean where normal rules are suspended; where tropical nature appears entirely benign. We were guests of Felix Dennis at Mandalay, his house derived from a Balinese temple and surrounded by gardens (many acres of them) that magically answer the questions I just asked. Our rules can certainly apply – and tropical colour and vigour can give them extraordinary new validity. The essence, of course, is control, as it is in gardens everywhere – but control of more powerful forces. There are plants that can grow a yard in a night, and leaves that could brain you if they fell on your head.

Mandalay, though, is almost English in its peacefulness, its composure, its slow revelations, enclosure by enclosure, of potent growth masterfully calmed. What is Balinese (swooping gables like mid-ocean waves, gates and screens, intricate carving, and solemn stone figures) speaks a visual language that justifies the cultural gap.

The Caribbean has no such language of its own: shanties and colonial porches are a pretty limited patois. But the devotional symbolism of the East (you can almost hear the chants and gongs) is at least as potent as the Greco-roman idiom of our own classic gardens.

The first gate, with its concave-gabled roof, shows you a downhill curving avenue of palms though a park of short grass mown not by sheep, as you might imagine, but by the tortoises that wander everywhere on the island. Then comes a second gate, flanked by menacing stone warriors and flaming dragons, before the first courtyard, calm, domestic, with two square fountain pools in a carpet of grass. Not grass as we know it, but a deep spongy surface that rears up in random mounds. Enormous conch shells hold water in their white basins on either side of the next gate: the front door of the single-storey house. Fire comes before water; challenge before welcome.

The opening of these great wide doors is a moment of revelation: straight ahead and far below lies the sea, scattered with yachts. But between you and the sea lies a piece of still water reflecting the sky and meeting the sea with an invisible edge. And daily at sixo’clock the sun goes down in purple and gold in the centre of this magic mirror.

Now you are in a cloister of gleaming burnished deep brown wood carved in fantastic intricacy and filled with the colours of flowers and fish. Scarlet and silver koi dart and glide among tall blue water-lilies. Pale blue plumbago covers the banks between purple and scarlet flowers and deep green circular leaves. A gallery at one end of the cloister is open to a view of palms and distant hills. And each room off the polished corridors has a balcony revealing another kind of garden: some intense with bamboo and idols, some serenely open to the world.

There are many layers, cultural and physical, at Mandalay; of formality, for instance, from the central drawing room, frescoed as a derelict stone temple, its roof just waving palms, to studies and bedrooms and playrooms and the swimming pool, an alternative heart to the house. The pool, surrounding an island and surrounded by plants, is filled by one long cascade and spills over another, seemingly into the sea far below. I wish I could name half the plants, but among the bougainvilleas, as varied as azaleas, the hibiscus and gingers and strelitzias, heliconias and anthuriums, the frangipani trees with their white flowers on bare branches scent the night. There are layers of lower storeys too, joined by staircases and galleries among the jostling fronds of palms.

Felix Dennis is an extraordinary Maecenas, publisher, poet and author as well as the gardener who, here and in Warwickshire, orchestrates such creative planting. Even Mandalay pales beside the thousands of acres of native trees he is progressively planting for our general benefit near Stratford on Avon.