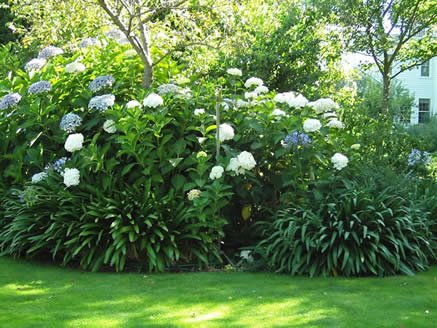 The Murdoch family has had such a bad press recently that I keep remembering a visit to Dame Elisabeth, Rupert Murdoch’s mother, at her garden south of Melbourne, it must be ten years ago. Ten years ago she was only 93; at 103 she remains a central figure in the cultural and charitable life of Melbourne – and a passionate gardener.

We were introduced to her at a garden festival at Hatfield House by Marchioness Mollie. We went to tea with her a year or two later at Cruden Farm, the house her husband Keith gave her when they married in 1928. There was nothing formal about it; she put the kettle on and fetched a cake tin, then told us that she had just driven to Melbourne and back (she drove herself in a small car) to chair a meeting of one of her
charities. The garden, she said, was too big to walk round, so she drove us in her buggy, stopping every few yards to point out a plant with evident knowledge and relish. There was a lot of new planting going on around a recently-made lake.

You reach Cruden Farm down a long curving alley of Corymbia citriodora, the gum tree equivalent of Betula jacquemontii, but whiter of trunk and more sinuous. A Rugby goalpost, as it were, with hips. Tall trees shade the white clapboard house, one of them an oak I have never seen before or since, an evergreen with leaves rather like Quercus turneri but immensely tall and as deeply drooping as a weeping beech. Its name is Q. Firthii. I want one. Hydrangeas are stacked in tall banks round the house, their feet in a lush bed of agapanthus; blue and white the predominant colours.

But any memory of the planting is hazy beside my memory of the woman who was brought home here as a bride at 19 and has reigned in the garden (and in Melbourne) ever since. The innocent pursuits of philanthropy and gardening have occupied her for eighty years.