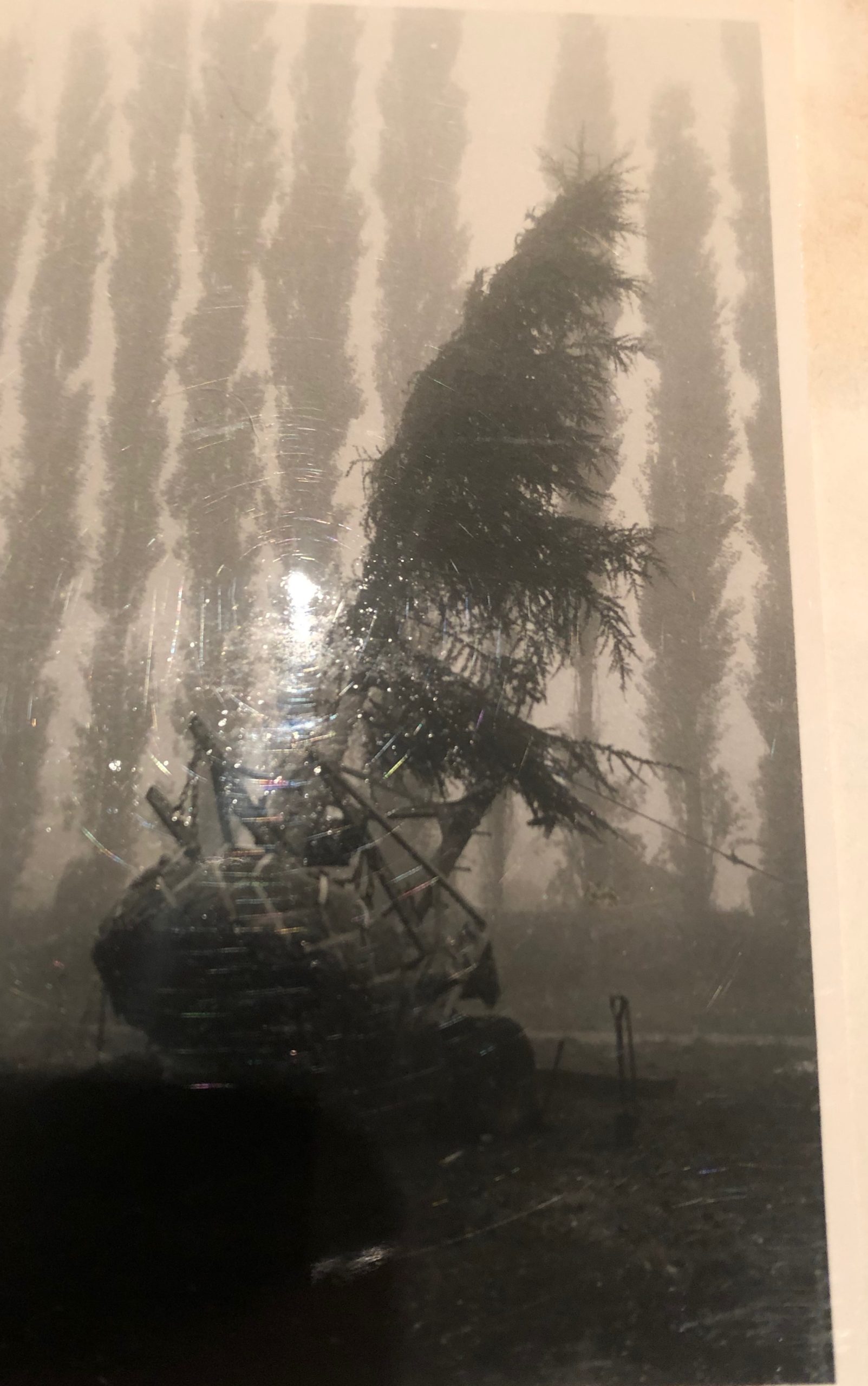 The Saling Hall cedar on the move

I came across an old photograph, taken in 1987 in November mist, of moving what is now the substantial cedar of Lebanon at Saling Hall. I had been rather sniffy about moving big trees. Buying trees ready-grown, I sniffily thought, was was almost as infra dig as buying your own furniture. I know noblemen used to shift the trees around their park with massive contraptions involving teams of horses. There was a famous transfer of trees in the 1760s from the Duke of Argyll’s collection at Whitton in Hounslow to Kew, then under development by the Earl of Bute. (It’s funny how many Scotsmen are involved in these matters).

Our cedar came from Easton Neston, courtesy of Lord Hesketh. The mover, no horses required, was Chris Newman, who operated the first Tree Spade in the country, an ingenious sort of mighty scoop to lift a big rootball and shunt it to a new home. Today his business is called Civic Trees. In exchange for the cedar he took a good twenty foot walnut to plant in Henry Moore’s garden at Much Hadham.

For our incipient arboretum at Saling I almost always looked for ‘maidens’, young trees with all their branches from the base up, as opposed to standards or half-standards that had had their branches cut off. My hunch was that they would quickly establish and in a few years overtake bigger specimens. They almost always did, so long as I followed my own 3-year rule. 3 years, that is, of unrelenting TLC, of which watering was by far the most important part.

In those days there was virtually no need to go further than one nursey to find almost any tree or shrub you had ever seen or read about. The Hillier family had ‘previous’, as they say, but Harold Hillier was an obsessive. By happy chance Hilliers Manual of Trees and Shrubs was published in the same year as my World Atlas of Wine, 1971, and in the same year we moved to a house with space to plant. When I bought my first Manual I had little notion of what a unique and precious document it is. It was the work of Harold (since Sir Harold) Hillier and his assistant Roy Lancaster. Not only did it list and describe what seemed to be the entire repertory of trees that anyone could plant in Britain. It actually offered them for sale. Yes, you could order the complete Quercetum or Sorbetum or Cupressetum (if there is such a word). It would be delivered to your door, and bingo, you would be a celebrated Collector. Not instantly, mind you. The trees were not all lined up in pots at Romsey waiting for takers. Sometimes you had to wait for the propagator. And there is the apocalyptic story of the customer who telegrammed H.H. ‘Trees arrived. Presume roots follow.’

He was unlucky. Most of the scores of trees I eventually ordered turned up in due course, roots intact, were planted, and, after their three years, thrived. Most of them, I am happy to say, still do. And this is really the point of this story: the happy ending. We were the curators of the growing collection for forty years. Now, eight years after leaving, I am in regular contact with the new owner, who sends me bulletins, photos confirming identities and answers my questions about progress. In all there are something like a thousand woody plants on the list. How lucky am I still to be enjoying what I planted fifty years ago?