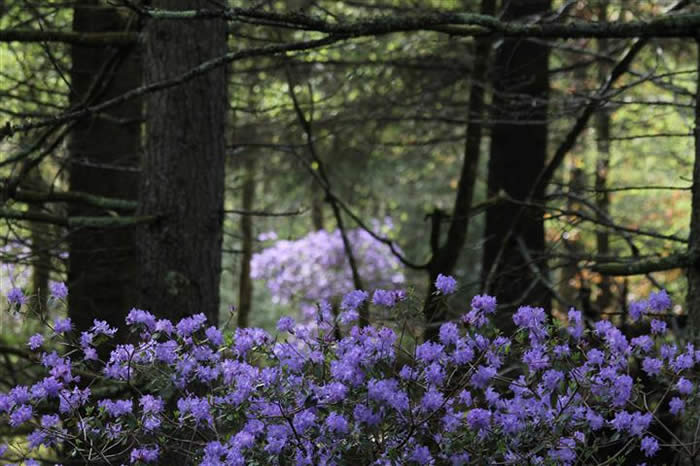 Rhododendron augustinii at Cae Gwian, planted 15 years ago. The dim light is part of the point. So is sunlight

Just home from our first visit to the Welsh woods since the near-hurricane on Valentine’s Day. The funny thing is that trees never fall in predictable ways. There seems no reason in the mess of often criss-crossed trunks. I like the French forester’s term for it, ‘chablis’ – perhaps because it makes me think of a cool beaded glass of something on the green side of gold.

You’d expect most of the damage to be on the windward edge. Often it is scooped out of the middle of a plantation. Worse than the loss of trees is the muddy chaos where the harvesting machines have to shuffle to and fro bringing the timber out to the roads where lorries from the mills collect it (in 25 ton loads, not greatly appreciated by motorists on the narrow winding roads.) Happily there is a demand for the massive spruce logs,16 feet long. House-building must be picking up.

It rained all the weekend. But whoever said there is no such thing as bad weather; only the wrong clothes, had a point. Slipperiness is the main problem: you feel constantly in danger of falling over. Also rain on your camera lens – because curiously. I have an urge to take photos in the low light. Colours are saturated and the lack of shadows gives a different value to what you see.

Best of all were our blue rhododendrons, hovering over the bluebells under the pale green of beech and larch in fresh leaf. In the rain their purply blue took on a savage intensity, while in the distance they were insubstantial wraiths.

It was a poor weekend for the National Gardens Scheme. We were almost the only visitors in a garden in Dolgellau that deserves crowds. Craig y Finnon is the garden of a fine Victorian house restored by its plantsman owners, Jon and Shàn Leas. There is exquisite precision in their gardening, whether formal in box hedges or spreading among massive rocks where azaleas and alpines cohabit under splendid old trees with moss and ferns. Royal ferns sow themselves in the rocks and send up shoots like bishops’ crosiers. The black slate drive was filled with pink flowers falling with the rain from arching rhododendrons. It was a moving visit, seeming to encapsulate a century and a half of skill and devotion to the perfect plants for a dramatic site.