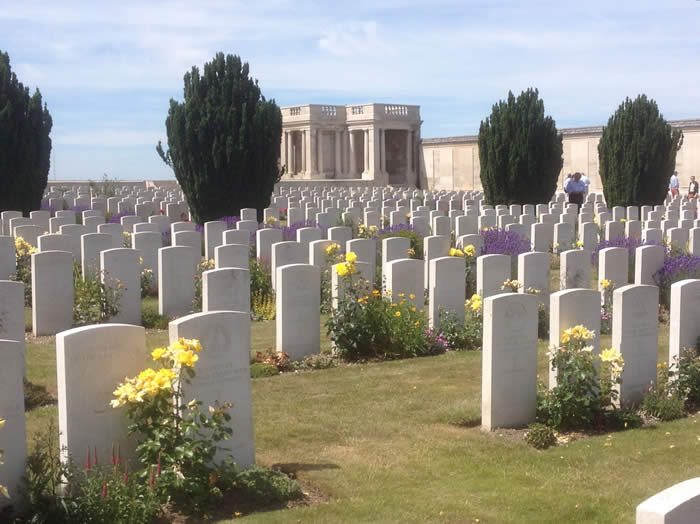 A warm weekend’s visit to the battlefields of the Ypres salient, one hundred years to the day after my father was wounded there by a round from a German Maxim machine-gun. He carried the bullet in his wallet for the rest of his life in an envelope marked “German bullet that wounded G.F.J. in June 1915 at Ypres, taken out at Guy’s Hospital by Sir W. Arbuthnot Lane”

He was secretly rather proud that he was operated on by this famous surgeon (the model, it was said, for Sir Cutler Walpole in the Doctor’s Dilemma), incredibly soon after being wounded. Trains were shuttling the wounded from the front to Calais and London. ‘I woke up’, he wrote to his mother, ‘in a London Hospital’. He was lucky. But six months later he was back with his battery (he was in the artillery) in the same spot.

The cemeteries tell the story of some of the worst battles. The bodies were buried near where they died, at the beginning of the war in nearby churchyards, soon in plots appropriated as cemeteries. One of the biggest, with 12,000 graves, is beside the principal ‘dressing station’ by the railway.

The cemeteries are gardened by The Commonwealth War Graves Commission, to a standard the Royal Parks would be proud of. There are many miles of straight edges and immaculate hedges with white headstones in parade order. Some have pavilions or cloisters whose walls carry the endless lists of the dead, listed by regiment. Tens of thousands are anonymous, but those that were identified carry the name, rank and regiment of the soldier, and most of them his age, very often between 19 and 25. In June scarlet roses and bright purple lavender form our tricolour with the white Hopton Wood stone that was generally used. Their trees form an arboretum, interestingly chosen and perfectly kept. There is much to learn in these battlefields – even about gardening.