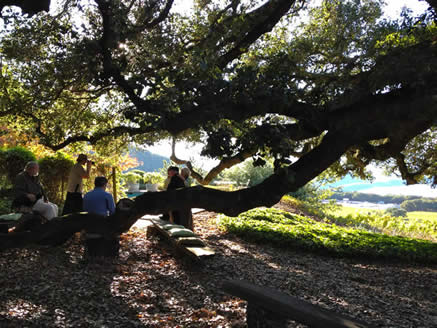 I have watched Molly Chappellet’s garden evolve and mature over many years. The elements that make it one of the most beautiful and memorable I know haven’t changed. The view to the northwest, over the plunging vineyards, over the waters of Lake Hennessy far below to distant Mount St Helens, the huge volcanic boulders like fossilized wild beasts stalking the landscape, the huge dark domes of many-centuries-old oaks, these are the anchoring elements.

The dynamic ones are the light (when the sun sets behind the vines in October there is gold-dust on everything) and Molly’s planting. No one can tell where the garden begins, and it really doesn’t end: it spreads out as a vision that encompasses everything from the eaves of the old timber ranch-house to the purple ridges of the hills. Lavender, euphorbias, irises or eight-foot artichokes meander off downhill to meet the regiment of vines. The vines advance among the oaks, the rocks among the cherries, the roses among the lemon trees – and the paths and platforms for walking or sitting are smoothly raked caviar, or so it seems. The grey granular surface is the grape-pips of vintage after vintage. They pile the purple pomace from the press and wait for the skins to disappear.

The boulders are unique, it seems, to Pritchard Hill. A wine-grower has a choice: either plant his vineyard in the spaces between these massive chunks of stone strewn over the hills or dig them up and move them  – a task of unknown size when

the digging begins. One mammoth in the centre of the vineyard amphitheatre below the house weighs 70 tons. It provoked Molly to make another garden around it and some of its fellows: just a shawl of native shrubs, half a dozen Lombardy poplars and a caviar floor.

On this visit, though, the garden had another dimension. The biggest of all the spreading oaks, perhaps 100 feet across its ground-scraping branches, began to sing. Molly’s musician friends had composed its hymn to being, a mysterious flow of flute and strings that came from the heights and the heart of the tree: the prelude, leaves; the presto, storm; the adagio, roots; the intermezzo, life and the finale, air. (Should I mention, or not, the fact that the flautist had climbed to the furthest branches to rig speakers?)

You could call this, if you like, Extreme Gardening. But that sounds like something extravagantly imposed. There are a score of great gardens in the Napa and Sonoma valleys, and Molly Chappellet has had a hand in many of them. But there is no trade-mark touch, no heavy hint that a great landscaper has been involved. Her influence seems more like a spiritual one.