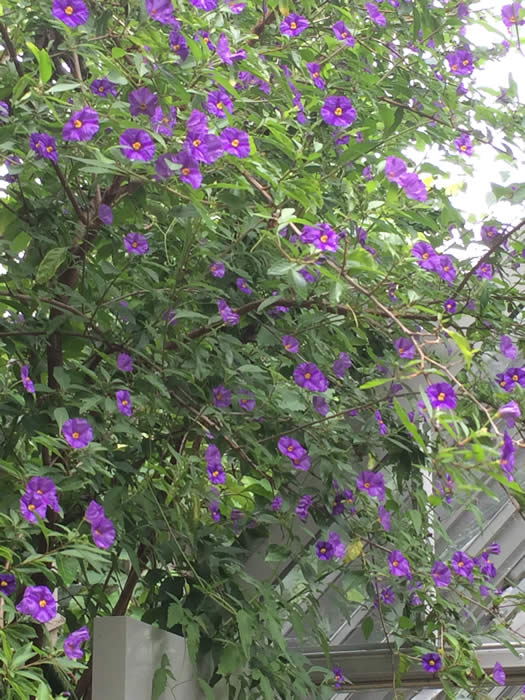 It was 1971 when I decided that agapanthus were worth the risk. Could we grow such midsummer beauty, elegance, and above all blueness, in Essex? The word at the time was that Headbourne Hybrids was the only reliably hardy strain. I chose a stretch of bed with no shade, laced the soil with gravel and protected the plants from wet for the first winter with slates perched on bricks. It worked. They were still flowering when we left Saling Hall 40 years later. But now, of course, we are confidently planting lots of better ones. I seem to leave Chelsea every year with a bigger, bluer, stronger variety, many of them evergreen.  Last year’s, from Hoyland Nurseries’ stand, was ‘Queen Mum’, white flowers blue at the base of the petals.  A bit bizarre for a border but grand in a pot. There are no more worries about tenderness – certainly in London.

This the bluest moment of the year for us, if you admit all the purples and lavenders as honorary blues – which allows the geranium of the century, Roxanne, sprawling through half the border, into the picture. Also the pretty, airy Isotoma ‘Blue Star’ in a pot. Crowning them all at present is another plant only recently admitted as reasonably hardy, a solanum we see in the south of France. Solanum laciniatum, Australia’s Kangaroo Apple. It grows on the shady east-facing wall behind the greenhouse door, and in three years has reached over 12 feet, green densely starred with light blue/purple from spring to autumn. The yellow Clematis orientalis is reaching up into its heart.

My only worry is that some of the flowers of the solanum fall into the fish-tank below. The goldfish don’t eat them (two are ‘comets’, Halley and Haley, as in Hale-Bopp. Which is which we’ll never know.) Being potato-related could they poison the water? No sign of it so far.