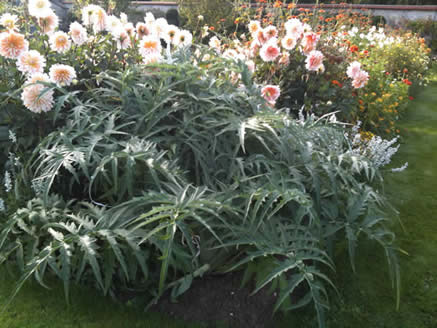 France has no RHS, or anything like it, so no Chelsea Show, let alone Wisley or Rosemoor. What it does have are two chateau-shows, competing genteely twice a year, in spring and autumn, near enough to Paris to attract the curious aspirant who seems to make up the main constituent of French gardening today.

The chateau of St Jean is on the southwest fringe of Paris on the road to Chartres. It’s 17th century builder was Pierre-Pail Riquet, creator of the greatest public work of his age,
the Canal du Midi. His descendants, the Curel family, achieve the almost equally difficult feat of keeping up a 17th century château and its gardens rather uncomfortably close to Orly airport.

I am always amazed at the self-confidence of such chateaux. Their scale, and the scale of their dépendances (stables, offices, farmyards,dairies, dovecotes, bothies and the rest) seem more remote from modern life every year. Which makes the Curels’ jardin potager as rare as it is beautiful.

Did gardeners of the time of Louis XIII really mix up the edible and the beautiful, or is it a modern fancy? It is a well- worked convention today; often stiffly, with contrasting colours and regular lines. At St Jean the vast parterre potager, several acres in a single wall, mingles the serried and the inspired as beautifully as I have ever seen it done. Ancient fruit trees line the walls and trace the principal axes. The rest is a tapestry woven with vegetables and perennials and annuals in patterns and harmonies that seem endless and effortless.

Has modern English taste been a major influence? In the freedom and profusion of the flowers, yes. In the subtlety of their blending I’m not so sure.